Atolls are ring-shaped reef formations with a central lagoon. They are rings of coral reefs ranging from 1 to 20 miles in diameter that are a result of the full submersion of an island that was surrounded by fringing and barrier reefs.[1] Oftentimes, atolls are uninhabited desert islands relatively untouched and unexplored by humans, although some grow beyond short reef formations, forming substantial landmass.[2] These islands and islets have become the home of several island nations including the Republic of the Marshall Islands in the Pacific Ocean and the Maldives in the Indian Ocean. [3]

Atolls are the third and final stage of Darwin's subsidence theory. After corals have colonized a newly developing island forming a fringing reef, the volcano gradually sinks as it cools and condenses, leaving the ring of corals behind.[4] This middle stage where the top of the island still emerges from the ocean but a lagoon has formed in the separation of the reef and island is known as a barrier reef. The corals continue to build upwards to stay in the sunlit range. Eventually the island will submerge completely, leaving one large lagoon and a ring of reef formations. This is an atoll.[1]

Atolls can range in size from very small to expanding over 130 km with land and lagoon areas of up to 3,000 sq. km. They also vary greatly in rim width. Some ranging only a few hundred meters while others form large islands. Additionally, because atolls are so old (they began as fringing reefs), their reef formations are built on thick layers of dead coral reefs. Scientists have drilled up to 1400 meters towards the ocean floor before hitting volcanic rock. [4]

While the expanse and colonization of atolls varies greatly, there are three distinctive characteristics that all atolls share: an outer reef, a perimeter (reef) rim, and a central lagoon.

Outer Reef is the ocean-facing side of the circle of corals. The lower portions slope steeply towards the ocean floor while the upper region forms a system of spur-and-groove formations.[5] These alternating buttresses and channels help to stabilize the reef and dissipate the force of the waves while the channels drain away accumulating coral debris and sediment. The region of shallow, sunlit, and oxygen abundant water is home to many large corals, coralline algae, and small fish. Larger fish like jacks, sharks, barracudas, and tuna often frequent the area in hopes of catching these smaller fish. [6] Additionally, the windward portion of the outer reef often forms a prominent algal ridge habited by an abundance of calcareous algae. [1]

Perimeter Rim is the portion of the reef formation that protrudes the water. It is the part that is visible from the air and sea level, forming the distinct circular structure. The perimeter rim, or reef rim, can vary greatly in width and may be broken at points, forming small channels that connect the lagoon to the outer ocean. If these canals form, the daily tidal cycles of the ocean allow circulation of the water within the lagoon. If the rim is continuous, the water in the lagoon must rely on strong waves to push water over the rim or the rain cycle to recycle water. [5] The perimeter rim may either form a reef flat or build into a reef island.

Reef Flat is a shallow structure up to 1,000-2,000 m wide that is most exhibited at low tide. When there is no island, the reef flat is the emerging structure that separates the open ocean and the lagoon.[5]

Reef Islands often develop on the windward portions of atolls. The high energy waves wash up coral debris and calcareous sediment from the oppossite reef rims which slowly build up to form an island. If uninhabited, these islands often develop huge colonies of seabirds. [5]

Central Lagoon slopes gently to form a shallow, water-filled canyon at the center of the rim of corals.[1] It can range from several to 70 meters deep and is most often characterized by an accumulation of coral sediment but may contain scattered patch reefs and coral spurs. In the formation of the atoll, the limestone reefs that had previously grown on the inner side of the barrier reefs begin to decay. Without the central island or connection between the ocean and lagoon, the resources and nutrients within the lagoon become very limited. The water in the lagoon often begins to look brighter teal as the limestone corals die and decay. [5]

Atolls are much more prevalent in the Indo-Pacific than in the Caribbean because of the relative abundance of submarine volcanoes.[1] Both the Pacific and Indian oceans have multiple series of atolls including the Marshall, Cook, and Caroline Islands in the Pacific and the Maldives, Chagos, Seychelles, and Cocos Islands in the Indian. [4] Most atolls remain uninhabited due to the lack of natural resources on the land. The soil quality is poor and there is a constant erosional threat from storms and rising sea levels. The cost of importing food to these remote locations also inhibits colonization. [2]

That said, many of the larger island atolls have been inhabited by humans who build island nations. The Marshall Islands are made up of 29 coral atolls which together account for more than 10 percent of all the atolls in the world. The capital of the Republic of the Marshall islands, Majuro, has a population of almost 30,000. [3] The Maldives and Kiribati Islands have also become successful island nations. They support their economy with fishing and tourism industries and combat the erosional threats by dredging the seafloor to fortify the atoll. These island nations are very active in the global warming discussion, often hosting international conferences on the topic. [2]

Atolls have had an interesting history. Because of their isolated and often uninhabited locations, atolls were used as testing sites for nuclear weapons by the US, Britain, and France after World War II.[2] In particular, the Bikini atoll was captured by the US during WWII and chosen as a site for testing in 1945 because of its more remote location. In this case, the atoll was home to hundreds of native islanders that the US displaced in order to use the site for testing.[7] Between 1946 and 1958, 20 nuclear weapons were tested on Bikini atoll. Reefs were destroyed and toxic chemicals were released into the environment.[2] The Bikinians were eventually returned to their island without realizing the potential harm of radiation-exposure. Several years later, the Bikinians were again removed from the island and compensated for medical conditions.[7] Today, the Bikini atoll remains uninhabited, but there has been recent evidence of regrowth in select coral species, giving hope to researchers that the atoll may someday recover the diverse ecosystem it once housed.[8] 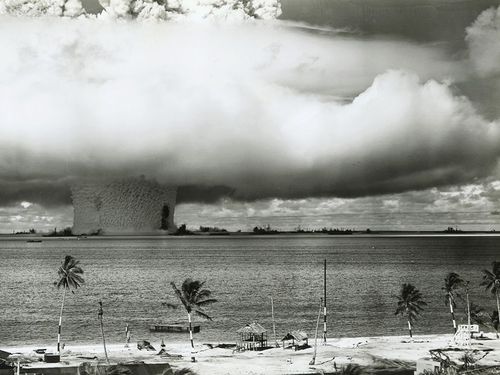