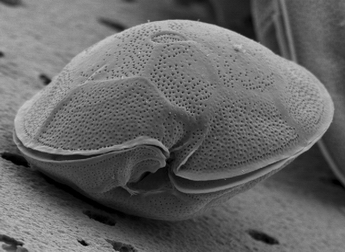 Ciguatera is the most frequently reported seafood-toxin illness in the world. [2] It is a food borne illness caused by eating fish containing toxins produced by dinoflagellate, a form of micro-algae, Gambierdiscus toxicus. [3] The most common symptoms of ciguatera poisoning include nausea, vomiting, diarrhea, muscle pain, dizziness, and vertigo[3]. While there is no cure for Ciguatera, there are multiple treatments available.[2] This disease has an annual reporting rate of roughly 50,000.[4]

The ciguatera toxin is found in large reef fish, most often in barracuda, grouper, red snapper, eel, amberjack, sea bass, and Spanish mackerel.[5] When large predator fish such as barracuda eat smaller fish that consume toxin-producing dinoflagellates, the toxin accumulates in the bigger fish.[5] While the Ciguatera toxin is harmless to fish, it is poisonous to humans.[4]

The toxin is difficult to detect, as it is odorless and tasteless and cannot be destroyed by cooking.[4] This is particularly relevant as the primary way humans are exposed to the toxin is eating ciguatera-contaminated tropical or subtropical fish. Once ingested, the toxin activates voltage-dependent sodium channels causing symptoms in human gastrointestinal, cardiac, and nerve tissues.[4]

Reported cases of ciguatera poisoning are normally found in the Caribbean and the Pacific and Indian Oceans. These regions around the equator are endemic areas, meaning it is native or restricted to these regions. Ciguatera poisoning is found in areas where coral reefs are present, due to the abundance of the fish that are most likely to consume the dinoflagellates responsible for ciguatera poisoning. However, ciguatera toxin can also be encountered in the deep coastal waters.[6]

There have also been imported cases of ciguatera, which occur due to the importation of fish contaminated with the ciguatera toxin to areas where these fish do not normally occur. Tourists may consume these contaminated fish while abroad, but not experience the symptoms until they are back home. The increased demand for “exotic foods” can also explain why there have been increased reportings of ciguatera in regions where it is not endemic. [6] 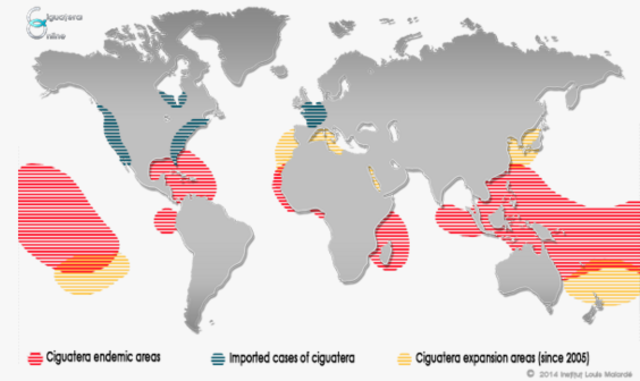 Ciguatera in humans is most often recognized through gastrointestinal and neurological symptoms. [7] Gastrointestinal symptoms include vomiting, nausea, and diarrhea. These symptoms are often followed by neurological effects, such as headaches, numbness, ataxia, vertigo, hallucinations, and paresthesia. [8] In severe cases, ciguatera also causes cold allodynia, a burning sensation that occurs on contact with cold.[7]

There is currently no cure available, but multiple types of treatments exist. The most studied type of treatment is intravenous (IV) mannitol. [2] Mannitol, is administered 0.5 to 1.0 g/kg body weight over a 30-45 minute period; it should be given within 48-72 hours of ingestion of the toxic fish. Mannitol should not be administered until the patient is adequately rehydrated, because a possible side effect of mannitol is fluid loss.[2]

Some medical providers suggest inducing vomiting through the use of Ipecac, a substance that causes vomiting, if the victim is awake and alert and has eaten ciguatera toxin-containing fish in the last 3 to 4 hours.[5] However, some researchers are saying the use of Ipecac causes too much water loss and increased dehydration.

Alternatively, some physicians also suggest the use of activated charcoal, which will help absorb the toxin if done 3 to 4 hours after ingestion of contaminated fish. [5] Amitriptyline and gabapentin can be used to help alleviate neural pain symptoms and diphenhydramine and hydroxyzine may help relieve itching.[5] Nonsteroidal anti-imflammatory drugs (NSAIDs) and acetaminophen can help with the pain.[5]

Ciguatera fish poisoning is difficult to prevent because the ciguatera toxin in fish is odorless and tasteless. The toxic fish also cannot be identified through appearance or behavior. This illness cannot be attributed to poor handling, storage, preparation, or procurement of the fish because the ciguatera toxin is heat-stable. This means that cooking, boiling, freezing, frying, or baking does not eliminate or destroy the toxin from the fish tissue. [2]

The main way of preventing ciguatera fish poisoning is to avoid consuming the fish that are most likely to have ciguatoxicity. Avoid the viscera because those areas are more likely to have higher concentrations of the toxin. It has been proposed that eating smaller portions of different fish is safer than eating large portions of any individual fish that may be associated with ciguatera fish poisoning. [2]

In order to prevent recurrent symptoms due to exposure to ciguatera toxin, you should avoid alcohol, fish, nuts, and nut oils. [2]