Coralline algae are usually pink or red but they can be other colors as well, including gray, green, blue, yellow, and purple. [1] This alga takes two main morphological forms. These forms are called branching (geniculate or articulated) and encrusting (non-geniculate or non-articulated).[2] The branching form protrudes from the substrate on which the alga is situated whereas the encrusting form grows along the surface of the substrate. [1] Although these forms are morphologically distinct, this is not altogether an effective way of describing the functions and characteristics of algae; this categorization is useful largely for recognition purposes. [2] 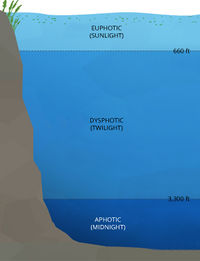 Depth of light penetration in water [6]

Coralline algae inhabit intertidal and subtidal coastal areas. It is necessary for the algae to perform photosynthesis, so its habitat is limited to the euphotic zone-- the range of depths where light can penetrate water (0 to ~200 meters deep). [7] Coralline algae is crucial for the construction of reefs, so reefs are found exclusively in shallow depths of water. [8]

Non-geniculate algae must live on an area that provides them with support. They are most commonly found on submerged ocean bedrock, but they can also live on other types of substrate, such as an animal shells or on top of other algae. Geniculate algae also commonly live on substrates, but unlike non-geniculate algae they have the ability to be partially unattached. As long as they are anchored so some part of the substrate, the rest of the algae can be independent. [8]

Algae can tolerate varying levels of water salinity. [7] They do not live in freshwater; only in salinated water. Coralline algae can also be found in aquariums, as they are popular accessories for decorative and functional tanks.

Coralline algae can reproduce either asexually or sexually. This is evolutionarily advantageous for the algae because they do not require seed fertilization in order to proliferate; they can perform budding as well. [7]

As a reef builder, one of coralline algae's most important functions is the secretion of calcite. The secretion of calcite binds reefs together into a contiguous entity. Calcite is a soft mineral composed primarily of calcium carbonate, CaCO3. Occasionally, it is possible for the compound to include magnesium and take the form MgCO3. [9]

Fouling is unique biological function coralline algae performs semi-regularly. Fouling occurs when algae sloughs off its outer layer of cells. [8] This is done for several reasons:

Coralline algae is classified as an epiphyte (a plant that grows on top of other plants). Because of their exposed placement, coralline algae is susceptible to organisms such as parrot fish and mollusks, which feed on the algae. [8] Coralline algae interacts with its environment in a unique way by promoting the settlement of herbivores and invertebrates. The algae produces chemicals that attract herbivore larval settlement. [7] After larvae development into mature adult stages, the coralline algae serves yet another supportive function by providing habitat for small reef animals and invertebrates. [7]

Coralline algae aid in composing reefs, but they are also inhabitants of the reefs. As such, coralline algae is threatened by the same factors that contribute to reef endangerment. For example, algae is susceptible to threats such as coral bleaching, which impedes the alga's ability to produce calcite-- coralline algae's key function in binding reefs together. [10] Without this supportive structure, reefs are more susceptible to the turbulence of the ocean and destruction of habitat becomes more likely. [10] Coral Bleaching

Coralline algae and reefs are susceptible to ocean acidification. Acidification occurs due to rising temperatures and global warming, and as a result, the concentration of calcite in the oceans can be altered to unhealthy levels. [9] Ocean Acidification

Coralline algae are also susceptible to coral mining. This highly destructive practice hurts all reef organisms, including coralline algae. Because algae serve as a food source, larvae nursery, and invertebrate habitat, mining and bleaching harm not only coralline algae but also its co-dependents. [11] Such is the case with all life that inhabit and compose reefs; they are inextricably linked to one another, and harming one de facto harms another. [11] Coral Mining

Coralline algae is threatened by direct extraction for economic use. Geniculate algae are especially targeted for their use in soil conditioner, animal food additive, pharmaceutical products. [12] Reefs are among the most biologically diverse areas in the world, so many species are at stake when any of these threats are posed.