Hermaphroditism can be broken down into two broad categories: protogyny and protandry.

Protogyny is a sex change from female to male. Protogyny is displayed as a normal part of the life history of 14 fish families, including wrasses and parrotfishes[1]. This means that in these families of fish, it is expected for an individual to began its life as a female and then switch to become a male later in life.

Protandry is a sex change from male to female, and is less common in fish than protogyny. Protandry is only observed in 8 different families of fish, including porgies, damselfishes, and moray eels[1].

In generalized terms, the size advantage model states that individual fish should change sex when the other sex would have a higher reproductive value at that stage in life.[1]. In mating systems in which large males monopolize the spawning of females, larger males have higher mating success than smaller males. With such a population dynamic, size is less important for females. In this mating system, it can be beneficial to begin life as a female when small and then change sex to a male once a large enough size is reached to maximize mating ability. A mating system in which large males monopolize the spawning of females thus favors protogyny, or the sex change from female to male.[1]. In other mating systems where no monopolization occurs, there is no size advantage for males to be large. However, in systems where random fertilization occurs, it is beneficial for females to be larger because larger females are able to hold more eggs. This type of mating system would favor protandry, or the the changing of sex from male to female. A male would undergo this sex change once the male grows large enough to gain a reproductive advantage from being female [1].

Hermaphroditism in Wrasses and Parrotfishes 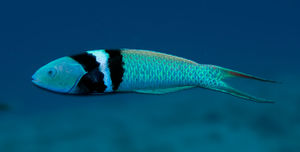 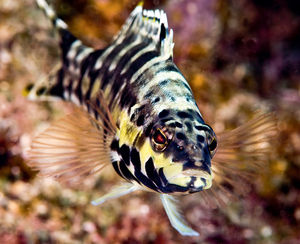 Hamlets undergo a practice called "egg trading" in which a pair of fish alternate sex roles over the period of mating. This behavior forces both individuals to expend energy into egg production so that neither individual is forced to produce all of the eggs alone.[1] Other basses in the genus Serranus undergo mating just before nightfall so that simultaneous hermaphrodites functioning as males will not have enough time to fertilize multiple females. This strategy theoretically prevents individuals from functioning solely as males without expending considerable energy themselves in egg production. [1]