Predators are a vital part of the food web and help keep ecosystems in balance. In addition, they are an important component of evolutionary pressure on prey organisms, causing them to adapt methods of avoiding predation. To overcome a variety of difficulties associated with predation in an aquatic environment, marine predators have also evolved in order to develop ways to detect, contact, and consume prey. 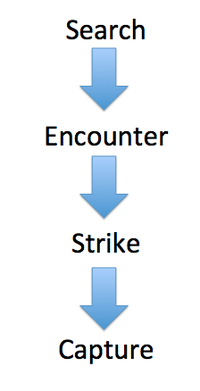 Metabolism is the collective term for all chemical processes within an organism. This includes processes such as biological processes required for locomotion, respitation, thermoregulation, and maintaining blood chemistry. Metabolic activity in fish depends on nutrition and respiration for metabolites (organic food and inorganic matter such as oxygen that fuel metabolic processes), osmoregulation (regulation of salt content to water within the body) to provide a stable working environment, and the excretion of useless or poisonous waste products. [2] Without enough energy to fuel vital metabolic functions, the fish will die. Anaerobic metabolism the primary energy system for quick, powerful movements; however, this system is quickly depleted. It serves as the primary energy source for fish predation methods based upon sudden bursts or striking mechanisms such as "ram" or "pivot".[2] Due to the small energy reserves of anaerobic metabolism, fish must choose when to use such predation methods at times of the greatest chance of success. Consumption of prey is the primary method of obtaining energy. Gross energy is the total energy released by food consumed by the fish.[2] Digestible energy of the food is the amount utilized and digested.[2] Energy lost in waste and excretion is included in gross energy but not digestible energy. Metabolizable energy is that which is actually used by the fish to fuel metabolic activity.[2] All predatory behaviors add to the total cost of predation. These include sensory abilities, searching for food, responding to and capture of prey, handling and ingestion of prey. A fish must balance the energy cost of capturing prey with the energy it will gain from consumption. 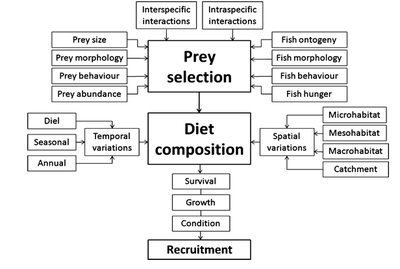 A clingfish in the Caribbean exhibits camouflage. 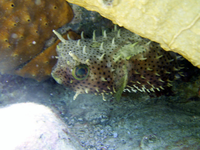 Some fish, such as the bridled burrfish, have defense mechanisms to avoid capture. 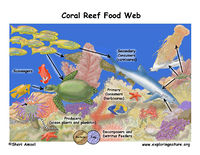 Juvenile fish are the most susceptible to predation.

In the Caribbean, the lionfish is an invasive predator. Invasive species can alter the food web.

Nurse sharks are a common predator in the Caribbean. They are bottom-feeders.

Size is the most important factor in determining predation rates. For example, there is a decreasing rate of predation by jellyfish as fish larvae size increases. One fish that is commonly found in the Caribbean, the porcupine fish, inflates its body in order to increase its size, therefore decreasing the predators that would be capable of eating it. Predators would have to have a larger jaw in order to eat the porcupine fish. Predation occurs at all sizes of organisms. Microscopic organisms are predators, and so are large whales. The highest rates of predation occur on juvenile fish. This is because predation is most common during life transitions. After fish larvae hatch, the are more susceptible to predators. Fish are also susceptible to predators at another life transition - during mating. [5] Most fish are active either during the day or at night, not 24 hours. Their diurnal or nocturnal feeding is normally fixed genetically.[6]

Predation is a strong force of natural selection. The weaker species is eliminated. Fish predation is an important evolutionary force because when certain types of fish are targeted by predators they do not have as great of a survival rate. They are forced to acclimate, and as numbers dwindle and the more advantageous fish win out, and the fish population will evolve over time. [1]

Prey in an aquatic habitat are harder to capture than those on land due to the difference between the prey and the surrounding medium's density being lower in water; this causes the prey to be pushed away upon approach by a predator. For this reason, fish have developed a variety of methods to become successful predators in water.

Fish opens its mouth and rapidly expands its oral cavity, thus creating a negative pressure. When the mouth is opened, water rushes in, drawing in the prey item from a distance. This is a common feeding technique of sharks (like the Nurse Shark), rays, and other fish (e.g. the Atlantic Guitarfish).[7] [8]

The fish swims over the prey with its mouth open. Ram feeders overtake the prey with body swift movements, and finish the attack with an explosive strike of suction feeding. At the very least, some compensatory suction is needed to eliminate the bow wave formed as the fish swim toward the prey. Tunas exhibit ram feeding in their predation methods. [9] The Great Barracuda is another fish that commonly employs this strategy.[10]

Rather than translocate its whole body to reach prey, a predator may instead move only its head. Fish employing pivot feeding lift their entire head (including the mouth) to close the gap between it and the prey. It is much slower to accelerate a fish's whole body than just its head in order to close in on near by prey. Pipefishes, like the Harlequin Pipefish, often use this method of approaching prey. A longer snout allows for faster approach of prey with just the turning of the head than a shorter snout; it has been observed that longer-snouted pipefishes tend to feed on more agile prey than their shorter-snouted counterparts.[11]

Another way to get close to prey without moving the entire body is jaw protrusion. Here the fish extends its upper jaw in order to close the distance between its mouth and prey so suction feeding can be utilized. In addition to closing distance between predator and prey, the jaw protrusion allows for a larger mouth volume, resulting in a greater suction force being generated when the mouth is opened and the vacuum created. This adaptation can increase the total force exerted on prey up to 35%. The Spotted Grouper is a slow mover so it uses this jaw protrusion mixed with suction feeding to "inhale" live victims that swim close enough to its mouth. [12] Some Angelfish also have a protruding mouth, giving them the ability to reach prey hiding in small crevices in the reef. [13]

Predators capture prey by pumping water through filtration structures. This method is seen in variety of species in zooplankton, bivalves, sponges, tunicates; common examples are Christmas Tree Worms, which passively use tentacles sticking to capture plankton, and the Giant Clam. [14]

In this scheme, the predator actively captures nearby prey by using tentacles. This method is not entirely passive, some modify arm and pinnule postures to take best advantage of prevailing and changing flow patterns and velocities. This method is used by species throughout octocorals, crinoids, scleractinian corals. [15] The feather star is a common example of a creature with this feeding tactic. [16]

Some coral reef predators develop physical traits evolved for a more advantageous and specialized predatory technique. An example is the parrot fish: it has beak like jaws for scraping algae off coral and teeth for grinding coral. [17]

Another means of capturing prey is by making physical contact with them and transporting them to the mouth. An example of this would be biting, which is used by sharks.[18] Another common example is the butterflyfish's technique of gripping and removing pieces from polychates, nemertean, corals, ascidians, echinoids, hydroids and other prey that attach themselves to hard substrate. [19] However, this form of predation is not limited to jawed fishes. Hagfishes and lampreys use teeth attached to dental plates that are extended and retracted during feeding, this pulls the prey into its mouth. Jawless fish can transmit the most force possible with this method but it does not allow for the faster feeding that allowed jawed fishes to become evolutionarily successful.[18]

In addition to the methods of consuming prey, there are a variety of strategies that fish use to attract or come into close proximity with prey. Often fish take advantage of specific niches in their ecosystem or exhibit further physiological adaptations to achieve these goals.

These fish use a type of symbiosis, mutualism, to find and consume prey or food. The cleaner fish feast on the dead skin and ectoparasites found on the host fish. Cleaner fish attract clients by alerting fish to their presence with bright coloration, often a bright blue stripe. Cleaning gobies and wrasses are examples of fish that engage in this behavior. [20]

One strategy to get close to prey is to pretend to be something non-threatening; the mimic could resemble harmless creatures or even creatures that are beneficial to the targeted prey. Mimics may copy the motion, coloration, or morphology of other fish. Sharing signals with harmless species to avoid identification by a host or prey is called aggressive mimicry. Some species of fish have the ability to switch between colors so they may not always be employing mimicry, this is called facultative mimicry. A well-researched example of mimicry in the coral reef environment is the mimicry of the Bluestreak Cleaner Wrasse by the Bluestriped Fangblenny, allowing it to engage in parasitism and feed on scales and tissues of its host. [21] The presence of mimics can actually diminish the ability of legitimate cleaner fish to forage for food, as hosts become cautious of cleaning stations that have large populations of mimics. [22]

Some fish may use coloration, appendages, or irregularities in the body to blend in with or even mimic inanimate objects in the reef environment. Common examples are the scorpionfish and the frogfish, which mimic, exceptionally well, pieces of coral. Camouflage goes hand-in-hand with the ambush predation strategy in which predators lay in wait for prey to unknowingly get close to them. [23]

Some fish have ingenious methods of finding or subduing prey that are used in combination with physiological adaptations. Triggerfish are observed to dig out crabs or worms by flapping away debris with their fins or blasting the sand away with a jet stream of water shot from their mouth. They may also employ these methods or use their tough teeth and jaws to flip over sea urchins in order to avoid the urchin's spines. Triggerfish are so disruptive to small reef creatures they encourage other fish to adopt the predation strategy of following the triggerfish to get their leftovers. [24]

Fish have a host of sensory organs for navigating their environment and identifying food sources (prey) or potential dangers (predators). Many fish use vision, hearing, the ability to detect water currents, and chemoreception.Fish eyes are similar to their terrestrial counterparts', though they are more spherical. Most fish can see in color, while some can also see UV light.[25] The ability to detect and localize sounds is worse underwater than on land, but the majority of fish still use hearing. Fish can hear and localize sound through bone conduction; some fish may hear through their swim bladders (utilizing it as a signal amplifier).[26][27] Hair cells found in protrusions (so they are not visible on the surface of the skin) on the body of fish allow them to detect water currents around them. [28] Chemoreception is responsible for olfaction (smell) and gustation (taste); the chemoreceptors responsible for gustation play a major role in prey detection. [29] In some fish, chemoreceptors of gustation are located throughout the mouth, gill arches, and skin of a variety of appendages. [29] These chemoreceptors allow them to detect water-born chemicals and react appropriately to these stimuli in search of prey. [29] Olfactory systems in sharks are quite powerful (some can sense one part per million of blood in seawater). Direction of a scent is established using the difference in timing for detection by each nostril (similar to how mammals locate the origin of a sound). [29] Stress can greatly reduce a fish's ability to effectively use these sensory systems and result in a negative impact on feeding behavior.[2]