In terms of underwater species, there is generally less information about their reproductive systems than many other terrestrial animals due to the fact that they are more difficult to research and observe.[1] Although there may be less information, common fish reproduction mating systems have been observed that range from monogamous and polygamous systems all the way to hermaphroditism. Oftentimes, it is difficult to label mating patterns of fish and many fish species fall within a continuum of mating systems dependent upon the current environmental conditions. [1] Within these reproductive systems, subcategories of behavior can be readily distinguished between fish species. Though monogamy is rarely broken down farther, polygamy can be divided into subcategories of polygyny, polyandry, and polygyandry, which can also be further explained by unique patterns of fish behavior. Like the other fish reproductive systems, hermaphroditism can also be broken down further into subgroups that include sequential hermaphroditism and simultaneous hermaphroditism as well as protogyny and protandry. Sexual reproduction can also be characterized by active mating, where both sexes are directly involved in the physical process of reproduction and leads to internal fertilization within an organism, or passive mating, which can be characterized by broadcast spawning - also known as mass spawning or synchronous spawning - where an organism releases their eggs or sperm into the water column to be later fertilized externally by a member of the opposite sex.[1]

Monogamy is the practice where males and females have prolonged pair bonds. Monogamy usually establishes that an equal amount of males and females will contribute gametes to the offspring population. Monogamous relationships in fish species are usually practiced when individuals of the opposite sex are generally hard to find or environmental conditions find monogamous relationships to be more favorable to the species. In fish, it is very rare to find long term pair bonding with the exception of butterflyfish. More frequently, fish participate in sequential monogamy where the monogamous pair is only extended over one mating period instead of long-term. Parental care from monogamous pairs is more often seen in freshwater fish, but rarely in reef fish.[1]Though many fish do not choose to participate in monogamous sexual relationships, the few species that do tend to be extremely territorial. Monogamous freshwater fish include substrate spawners, mouthbrooders, and bubblenesters, including the cichlidae, osteoglossidae, heteropneustidae, channidae, and bagridae fish families.[1] An example of a monogamous saltwater fish is the anglerfish, which lives at depths much deeper than most coral reefs. 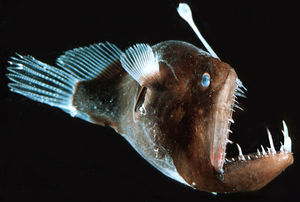 Male anglerfish, being much smaller than their female counterparts, permanently attaches to a female becoming a parasite that can feed off of the female while simultaneously providing sperm for anglerfish reproduction. [2]

Polygamy is the practice of having several mates either at once or over a period of time, and is much more commonly seen within fish species, especially those within coral reefs. At least one of the sexes mates with more than one partner. Polygamy leads to an unequal contribution of gametes to the offspring population from both males and females allowing some fish to be more evolutionarily successful than their same species and sex counterparts. The polygamous method for which a fish will show is dependent upon both spatial and temporal patterns of resource dispersion. [3] Polygamy can be broken down into polygyny, polyandry, and polygynandry.

Polygyny is the process where a single male mates and reproduces with several females within his lifetime. This mating process leads to unequal contribution of male gametes in the offspring population as some of male fish will be more successful than others. Polygyny is the most common form of sexual reproduction in terrestrial and aquatic organisms, including fish. Polygyny is further subcategorized into scramble competition, female defense polygyny, resource defense polygyny, and lek polygyny. 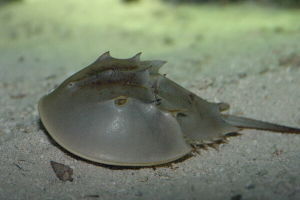 Scramble competition is identified by a resource that is in high demand but in low quantity; in the case of fish reproduction the resource is females gametes. This low quantity of female gametes is usually due to a short ovulation or fertility period on the female part, leading to high competition between males within a short time span. As a result of this high demand for female eggs, competitors attempt to gain an amount larger than its counterparts by being the fastest to the resource. This process leads to a larger share of gametes to the offspring population by males who are quicker and stronger in relation to obtaining female eggs. An example of an organism that participates in scramble competition sexual reproduction would be the horseshoe crab. [4] 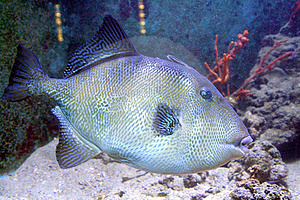 Female defense polygyny is most easily identified by males competing to defend an aggregation of females, where the male with the greatest physical fitness and ability to defend mates subsequently contributes more gametes to the offspring generation.[4] Generally, the male will defend an aggregation of females within a specific territory. Once again, this leads to an unequal distribution of male gametes in the daughter population. Examples of female defense polygyny in the fish community include the grey triggerfish, occasionally seen in the Caribbean, as well as the halfmoon triggerfish, which is more common in the Indo-Pacific. 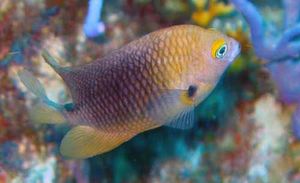 Resource defense polygyny is identified by males who hold and defend a commodity necessary for female survival, leading to an exchange of said commodity for male reproductive success with said females. Those males who can defend a resource better or a larger amount of resource are more likely to reproduce and contribute to the daughter population. This resource could be a food source as well as nesting areas for reproductively active females. Male fish are most often seen defending a nesting area. Damselfish most commonly participate in resource defense polygyny, as they are notoriously territorial and guard nests in which female damselfish can lay their eggs in. An example of a damselfish that participates in resource defense polygyny is the threespot damselfish. [5] 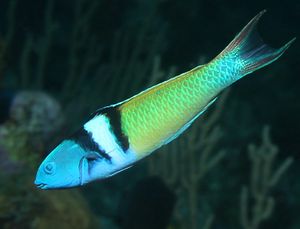 Lek polygyny is generally considered by biologists to be the most unusual of all polygyny tactics expressed by males. Lek polygyny is the defense of mating grounds by a male organism that gives little to no benefit to the females that mate with them. [6] In this system, there is no clear reason why the females choose their specific mates that they do, but it still leads to an unequal contribution of gametes from the male population into the effective offspring population. This is because, generally, females tend to choose the same mates as each other, although this continual choice of the same male mates seems to be arbitrary. Some males are more reproductively successful than others simply because they are chosen more often than others within this model. Lek polygyny is sometimes seen within the blue wrasse species, which is commonly found in the Caribbean.

Polyandry is the process where one female will mate with multiple males either at once or within her lifetime. Polyandry is generally uncommon within the animal kingdom, including the fish population. In this category of sexual reproduction, an unequal amount of female gametes are contributed to the offspring population due to differential success within the sex. Polyandry can be split into three subcategories that include classical polyandry, cooperative polyandry, and convenience polyandry.

In classical polyandry, females attempt to attract and mate with as many males as possible, leading to a large amount of competition between organisms of the same sex.[7] In the process of attracting a mate, females may evolve sexual dimorphism and compete in the same fashion seen in the subcategories of polygyny. Generally, males care for the young if classical polyandry is in use.[1] A high predation rate usually favors male incubation of eggs and care of offspring for the best success of both the male and female. [8] In this system, the ecological factors create an environment that is biased towards females, whom are not responsible for raising their offspring, and in return have the ability to mate with multiple partners in a short time span.

Cooperative polyandry is a process where "two or more males cooperate to assist at one nest."[7] In these relationships, there is typically a dominant male who shares mating power with a non-dominant male over one female. These subordinate males can be considered nest helpers, and in exchange, they usually gain protection, a relatively steady food supply, and a chance at paternity. [9] This type of polyandry is not typically observed in oceanic and tropical reef fish, rather those seen in lake habitats - including cichlids. 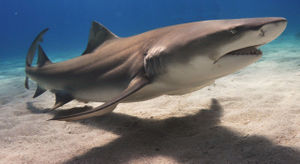 Convenience polyandry is the process where females accept multiple mates for sexual reproduction simply because the cost of repelling multiple mates is much higher in than the cost of mating with multiple males.[10] In many instances, the act of repelling a mate will actually increase the rate of harassment from the opposite sex. This is especially true in instances where there is an absence of refuge sites for both males and females, increased density and thus increased encounters of members of the opposite sex, or a biased sex ratio toward males. [10] Convenience polyandry is found to be most common in different species of sharks, including lemon sharks, sandbar sharks, and nurse sharks. This is believed to be seen in sharks more often because mating can become more violent, leading to injury of the females if they do not cooperate. [11] 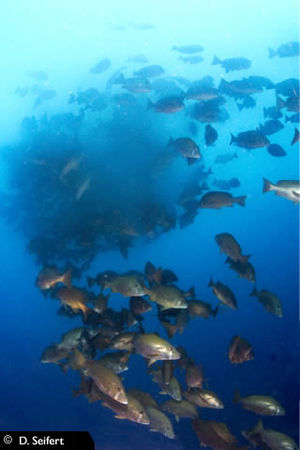