In the early 20th century, an American geologist named Reginald Daly proposed that the foundations of modern coral reefs were created during the last glacial period. Because glaciers held large amounts of sea water on land, the sea level was lower during this time period. Wave patterns formed erosional terraces that corals would later colonize. [1] His ideas came to be known as the Glacial Activity or Glacial Control Theory.

Reginald Daly wanted to explore the effects of the climate and sea level change during the glacial periods in the Pleistocene Epoch on coral reef development. In his time studying reefs in Hawaii, Daly noted that healthy corals flourished under a very narrow set of water conditions and that slight changes in Hawaii's water temperature, turbidity, or depth would have resulted in reef death.[2] Then, he theorized significant changes had taken place in the last glacial period. Sea levels had receded, water temperatures had declined, and turbidity had increased, inhibiting coral growth. During this period, the exposed reefs were subject to harsh erosion. Flat terraces formed in the eroding intertidal zones of existing structures. When the water level finally returned to normal, coral's recolonized these foundations forming barrier reefs and atolls.[3]

The theory can be broken down into five stages as follows and is represented in the picture below: 1) An island emerges from the surface of the sea, 2) Sea levels drop during glacial period, 3) Horizontal ledges and terraces are formed by erosional waves, 4) Glaciers subside and sea levels rise again, and 5) Coral reefs form on platforms creating barrier reefs and atolls.[4] 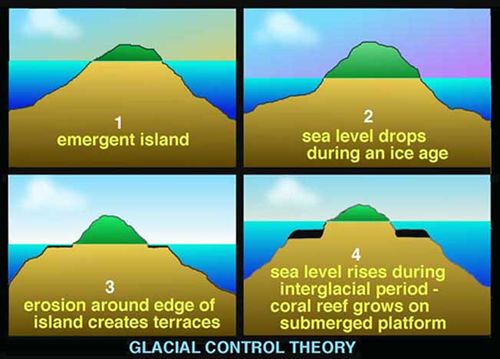 First responses to Daly's proposals criticized his reasoning, instead putting faith in Darwin's theory. This, however, was not necessary as the two theories do not directly contradict each other. Where Darwin's theory explains reef structure, Daly's focuses on surface morphology.[3] Daly's is also an explanation of reef response to shifts in the environment. His ideas about water temperature are applicable to issues like global warming. Just as water temperatures too cold could cause reef decline, waters can also be too warm for reef survival.

Since Reginald Daly's glacial activity hypothesis, researchers have studied coral processes and structure extensively. New technology and advanced resources have allowed scientists to more accurately estimate Pleistocene water temperature and ocean floor topography. It has become more apparent that the process of erosion and growth proposed by Daly may not have been possible in such a short span of time.

Pleistocene Ocean Temperature Recent measurements of the fluctuations during the glacial periods of the Pleiostocene Epoch estimate the ocean temperature to have dropped 3°C in the Pacific Ocean, about 4-5°C in the Indian Ocean, and 6-8°C in the Atlantic. Subtracting these from the winter temperatures in the reef seas, only the very outer margins would have dropped significantly enough to hinder coral growth. It is likely that corals continued to grow in the tropical waters during the glacial periods.[3]

Erosion Researchers are studying modern reefs elevated by tectonic activity to simulate the erosion that took place during the glacial periods. The process is similar to that predicted by Daly; emerging limestone reefs are riddled and filled with non-calcareous material while intertidal waves cut deep notches, eventually resulting in reef collapse. However, it seems Daly overestimated the time this process takes. The studies have recorded maximum rates of erosion around 4-7 millimeters a year on exposed coasts and only 1 millimeter a year where the reefs are protected. At this rate it would have taken 0.5-1 million years to level a reef 1 kilometer wide if the erosion was constant, which is much longer than any individual low sea level period.[3]

Reef Growth The current sea level has only been constant over the past 2,000-3,000 years. In perspective, this is less than 1% of the time of the Pleistocene Epoch. It is very unlikely that the grand and expansive reef formations seen today formed in such a short time.

Floor Topography The Glacial Activity Theory describes the formation of flat, level terraces later colonized by corals. Modern science has produced better images of the topography of these structures with echo-sound technology, and surprisingly, these structures do not resemble what Daly described. Instead, they are highly irregular.