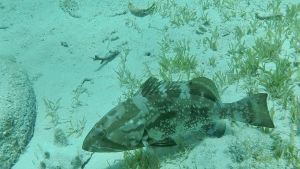 Groupers are a large group of predatory fishes in the family Serranidae, functioning as top predators in many tropical aquatic ecosystems. Grouper are easily recognizable due to their stout, round bodies and large mouths that are used to engulf prey whole. Common Caribbean grouper species include: 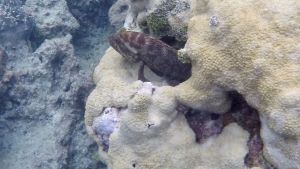 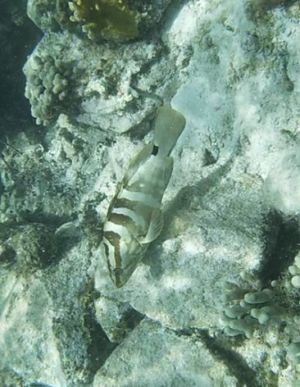 Suitable habitat for grouper includes hard bottom reef and rocky offshore environments both nearshore and offshore, at depths of up to 300 feet. Juvenile fish can typically be found in nursery environments or shallow reefs, with adult fish moving into deeper waters.[1]

Their diets typically consist of crustaceans and small fishes, with larger species preying almost exclusively on fish. Grouper are slow swimmers that rely on their large mouths to inhale prey, often habitualizing prey species to their presence in order to conserve energy.[2]

Grouper have a long and complex life cycle, reaching sexual maturity at roughly 5 years of age.[3] They spend the first portion of their lives in mangroves, shallow reefs, or other nursery habitats, after which they swim out to deeper water where they live out the rest of their lives. Groupers spawn in large groups called aggregations along the outer continental shelf, making them easy targets for commercial fishing operations that have discovered aggregation sites. Spawning typically occurs during the winter, with courtship and gamete release occurring between one female and a group of males. As Protogynous Hermaphrodites, Grouper are able to switch from female to male, a change that typically occurs in preparation for aggregation spawning.[4]

Like many reef fishes, Grouper have the ability to quickly change coloration. This ability can be used as a means of signaling, or camouflage for juvenile fishes. Grouper often use color signaling around small gobies when they desire to be cleaned of parasites and other bothersome ailments.[5]

As one of the highest valued families of reef fish, grouper have faced consistently heavy fishing pressure for decades. Grouper are also particularly vulnerable to overfishing because of the way they reproduce. By forming fish spawning aggregations (very large groups of fish coming together to release sperm and eggs into the water column at the same time), grouper are able to be harvested in large quantities with low effort during spawning season. Additionally, grouper take several years to become sexually mature, making it even more difficult for grouper populations to recover from overfishing. For these reasons, many species of grouper are considered endangered and most grouper fisheries throughout the world are depleted. The consistent overfishing of grouper that has occurred since the 1970s is responsible for the depleted fisheries and explains why fish sold as "grouper" in restaurants is so frequently mislabeled.

Because of grouper's position near the top of the food chain in reef ecosystems, the removal of this predator can have a large impact on the abundance of species on lower trophic levels. The trophic level of different grouper species varies, as do their roles on different reef ecosystems, but the presence of a top-level predator such as Nassau grouper or goliath grouper has been found to help recruitment of reef fish on lower trophic levels.[6] These predators help to maintain balanced populations of intermediate predators and species on lower trophic levels, and their removal can lead to a decrease in biodiversity. Additionally, the role of some grouper as ecosystem engineers that excavate burrows in reefs supports greater biodiversity by providing habitat for other species.[7] Due to their roles as top-level predators and ecosystem engineers, the removal of grouper can have serious impacts on reef biodiversity and biogeochemistry.

Prior to the 1970s, Nassau grouper were one of the most common species of grouper in the United States. However, heavy fishing pressure and the expansion of local fisheries to large grouper spawning aggregation sites caused populations to collapse. Currently, Nassau grouper is commercially extinct throughout much of its geographical range and is listed as threatened under the Endangered Species Act.

Because of its status as a threatened species under the Endangered Species Act, all harvest of Nassau grouper is prohibited in the United States. The range of Nassau grouper extends beyond national borders, so NOAA fisheries and its partners aim to conserve the species internationally through regional closed seasons that protect spawning aggregations during the spawning season. Targeted conservation strategies often aim to prevent harvest of Nassau grouper during seasonal spawning events so that the population can have a chance to recover, but this conservation requires very site-specific management to be implemented successfully. There is some evidence that Nassau grouper populations can recover from collapse, as the Cayman islands populations have seen a resurgence following targeted conservation actions.[8]