Three Types of Herbivorous Fishes and Their Body Structure [1] 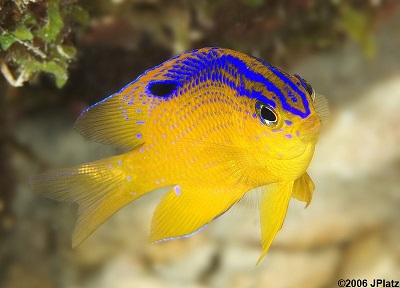 Roving Grazers are mobile herbivorous fish that move around reefs in large schools. These fish feed on macro algae and epilithic algae, algae that is found on stone. Blue Tang, for instance, benefit by feeding in large schools, because it allows them to overtake a territorial damselfish guarding its territory. Also, the large numbers protect the Blue Tang from predators. Doctorfish and Ocean Surgeonfish are also examples of grazers, but they vary from Blue Tang in that they graze in the area above reefs or the sea grass beds next to reefs.[3] The last type of herbivorous fish are scrapers. Scrapers are highly mobile fish that consume epilithic algae and remove sediment by scraping limestone surface of reefs. Parrotfish are an example of scrapers, because they swim across wide area of the reef, and use their strong jaw and fused teeth to scrape algae off the surface of corals.[3]A few other examples of herbivorous fish include butterflyfish and angelfish[4] Herbivorous fish can be further classified by the time of day in which they feed. They can either feed diurnally, meaning during the day, or nocturnally, meaning at night. Surgeonfish are an example of diurnal fish.[3] 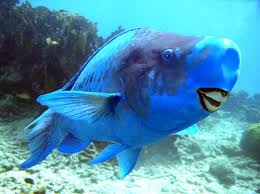 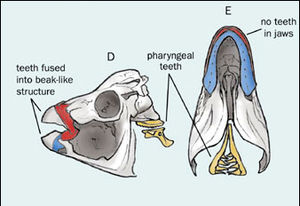 Typically, herbivorous feed on red, green, and brown macro algae[4] They do not have teeth in their jaws, rather pharyngeal teeth positioned farther back in their mouth/ throat region. They do, however, have small incisor-like teeth that can fuse to form a beak-like structure. One example of the beak-like structure is a parrotfish, the specialized mouth allows them to scrape and sometimes bite chunks of the coral.[3]

For digestion in herbivorous fish, the goal is to break down the complex polysaccharide cell wall of the algae, etc. that the fish ingest. The breakdown of the complex polysaccharide wall can be accomplished by mechanical, chemical, or enzymatic stress. The goal of mechanical digestion is for the stomach to grind the algal cells. This is done using a pharyngeal mill or gizzard-like stomach that breaks down the cell wall. In chemical digestion acid lysis is used in the cells of the stomach. For enzymatic digestion, enzymes produced by the gastrointestinal tract can further break down algal cells and intestinal microbes that are otherwise unusable polysaccharides. These enzymes have the ability to convert the polysaccharides into organic molecules that the fish are able to use.[4]Also, the digestive tracts of herbivorous fish sometimes contain protisan and bacterial endosymbionts to aid in the digestion of the plant material they eat.[3]

Benefits of Herbivore Fishes to Stability of Coral Reefs

Herbivorous fish help the ecosystem by maintaining coral -dominated states. They maintain the coral-dominated states by limiting growth of macro algae that competes with coral space. Algae compete with corals for sunlight and nutrients as well. [8]This has been proven to be beneficial, because studies have shown that a decrease in herbivorous fish can be linked to an increase in macro algae and coral reef mortality. Macroalgae and phytoplankton are the most significant primary producers in a coral system. Therefore, herbivorous fish essentially facilitate the maintenance of reefs in coral dominated states.[1] As a result, herbivorous fish exhibit strong top-down control of macroalgae. Elimination of herbivorous fish can negatively impact survival, growth, and recruitment of corals and increase the prevalence of coral diseases and mortality. Alteration in consumer pressure, meaning a decrease in herbivorous fish, will reduce coral reef resilience and increase probability that climate change, ocean acidification, etc. will drive reefs to state like algal domination.[7] However, it is important to note that the presence of herbivorous fish is not sufficient by itself to maintain a healthy reef, but a balance of herbivorous fish species is imperative in preventing algae from killing coral.[8]One of the most well-known cases of overgrowth occurred in the Caribbean after a previously unseen disease virtually killed off the herbivorous sea urchin Diadema antillarum, also known as the long spine sea urchin.[4] This event occurred in the early 80's, and is thought to be a result of the pathogen originating from the Panama Canal. The destruction of the long spine sea urchin allowed for the overgrowth of algae, killing off the coral reefs in the area. As a result, space for fish to breed was severely limited, creating a decline in the native fish populations.[8] Due to this, the local economy was also negatively impacted, because it caused a loss of fishing grounds and reef-related tourist activity. Before the loss of the long spine sea urchin, coral covered about 60% of the Jamaican reefs. By the year 2000, the coral only covered about 10% of the reefs.[8]