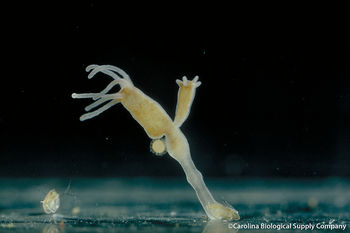 Hydrozoans are individual predatory Cnidarians. Contrary to popular belief Hydrozoans fall within the kingdom Animalia. Almost all Hydrozoans are colonial creatures with a two stage life cycle, polyp and medusa. Due to an abundance of similarities in distribution, life cycle, variation, structure and appearance, hydrozoans are often mistaken for corals and jellyfish.

The polyp stage is stationary, and attaches to rock or other immobile substrate. While polyps can live individually, they are almost always aggregated into colonies. Some individuals like the Hydra never leave the polyp stage. Despite being very atypical of Hydrozoans as a whole, Hydras are the most widely known and researched of the group. Their lack of medusa stage, occurrence in fresh water, and solitary life are all rare for Hydrozoans.

Much like other other Cnidarians, hydrozoans exhibit a huge diversity of body types and life cycles. Most often they develop colonies, which can take on a few different forms.[2] 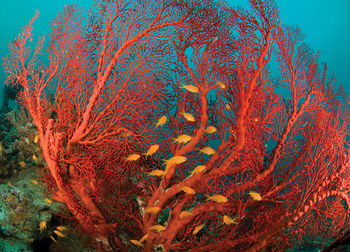 Fire Coral, an example of a coral like hydrozoan. [3]

Hydrozoan polyps are often symmetric, and can have a variety of shapes, including urn-shaped, conical, cylindrical, or club-shaped.Polyps can range from a few millimeters tall, to 2 meters tall, like Branchiocerianthus imperatorAt the base of many hydrozoan, there are hollow tubes, called stolons, which connect polyps in the same colony to each other, and allow for the transfer of food between polyps. Above the base is a ring of contractile cells called the sphincter, which can open and close as needed to isolate the polyp from the stolon, to prevent undigested food from entering the stolon.

Many colonial hydrozoans are polymorphic, and have different structures for different functions. Some have large spiny tentacles for defense, some have tentacles and mouths for feeding, and some have no mouth but reproduce in the form of producing medusae. As cnidarians, hydrozoans have cnidocytes. Cnidocytes, when prompted by a stimulus, shoot out of tiny hollow tubes in hydrozoans at high speed. Depending on the species of hydrozoan, these can be used to catch prey, fight off predators, or attach to a substrate. [4] 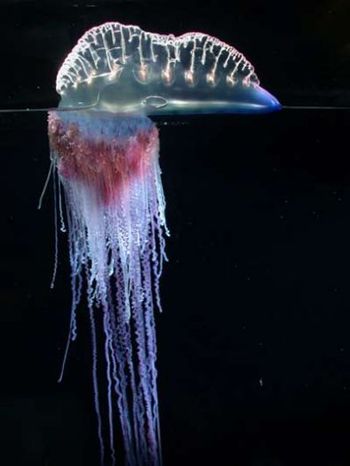 Portuguese man o' war. An example of a jellyfish like hydrozoan[1]

Much like the Anthozoans, Hydrozoans often create a calcium enriched skeleton during their polyp stage. Although they are so similar, it is believed that this calcification is a result of convergent evolution as opposed to an ancestral trait[5]As a group, Hydrozoans provide minimally to overall reef growth, but a few groups have played larger roles.

During the Tertiary period milleporids such as Fire-Coral were responsible for massive changes in reef architectureThese animals create a calcium carbonate (CaCO3) skeleton in which the microscopic polyps can live. This calcium carbonate skeleton is the visible part of the animal, and what gives the easy misconception that these Hyrozoans are true corals.[7] [8]

A founding polyp attaches to a substrate, and reproduces by budding to produce more polyps, to create a network of stolon, formed of living tissue, called the coenosarc. Some species form a single layer of polyps on top of substrate, while others will form stems of polyps coming off of the substrate. In the same way that colonial hydrozoans are polymorphic, so are the polyps that make them up. [9]

Hydrozoans, in terms of reproduction, are mostly broadcast spawners, meaning they shed gametes. In the case of hydrozoans, they mostly shed sperm and retain eggs, and release sperm attracting compounds.It is not uncommon however for both eggs and sperm to be released by the hydrozoan into the water column, and for fertilization to occur externally.Polyps reproduce by budding, either creating daughter polyps, medusae, or both. In some species medusae will reproduce by fission or budding. [2]