Effects of the Moon on Reef Organisms

The moon contributes to many important factors among reef organisms that help those ecosystems grow. Moon phases, light, and cycles each play a part in the process of coral spawning and species fertilization. There are other characteristics such as water temperature and water acidification that help with this too but without the moon, many organisms would struggle to fertilize gametes and grow into larval fish successfully. Some organisms also rely on the moon to cue other behaviors essential for survival. For example, many species such as manta ray, zooplankton, and isopods migrate to the shore which creates a great environment for both prey and predators. The prey seek the moonlight to identify predators better and the predators use this false sense of security to lure their prey out. Unfortunately, the effects of the moon have been inhibited by factors such as light pollution. Other forms of pollution have also played a role in destroying reef ecosystems by causing ocean acidification and the rise of temperature. It is essentially our responsibility to limit these variables and allow for the maximization of reproduction and growth in marine ecosystems.

The moon plays an important role in the underwater world. Many marine organisms rely on biological clocks synced with the moon that influence their behaviors [1]. In addition, the moon also impacts tides and currents. According to David Wilcockson, a marine biologist at Aberystwyth University in Wales, "when the moon is full or new, it is directly in line with Earth and the sun, exerting a strong pull on the ocean and thus causing more pronounced tides." Oppositely, when the moon is only half-full it causes neap tides, the weakest tide. This interaction between the moon, tides, and biological clocks is especially notable when considering reproductive behavior.

Synchronous spawning, a type of external fertilization, is observed in many marine organisms, including corals [2]. According to the National Oceanic and Atmospheric Administration, synchronous spawning occurs when "entire colonies of coral reefs simultaneously release their tiny eggs and sperm, called gametes, into the ocean" [3]. This phenomenon occurs at night and is influenced by environmental cues such as sea temperature and lunar cycles. Sea temperature and gamete maturation determine the spawning month while lunar cycles determine spawning day [4]. Moonlight also impacts spawning by acting as a signal for corals and other organisms to release their gametes. 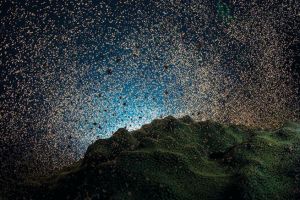 Moon phase, specifically the full moon, is an important environmental cue that leads to the synchronous spawning of coral. The majority of corals spawn a few days after a full moon, however, there are a handful of corals with irregular spawning habits, such as the Diploria labyrinthiformi which spawns closer to the new moon [2]. Scleractinian corals are one of the most studied lunar-spawning corals. These broad-cast spawning corals release their gametes after the full moon, however the specific number of days after the full moon varies. Sea temperature and wind speed before the full moon account for this inconsistency in spawning days. Therefore, corals have the ability to adjust their behavior in accordance with environmental cues to maximize reproductive success [6].

Not only is the moon phase important for synchronous spawning but also for other organismal behaviors. For example, the giant manta ray tends to migrate towards nearshore habitats during the full and new moon phases [7]. Studies have also shown that demersal zooplankton is affected by changes in moon phases. A study conducted in the Great Barrier Reef discovered that 14 out of 17 species of demersal zooplankton appeared in greater numbers during the quarter and new moon phases. Gnathiid isopods, a type of marine demersal zooplankton, are crucial to coral reef ecosystems. They are an ectoparasite and a principal food source for cleaner fish and shrimp. The activity of gnathiid isopods is influenced by the different phases of the moon. Infestation by gnathiids was found to peak at night in reefs in the eastern Caribbean. Additionally, larger gnathiids tend to appear at night. Studies of gnathiid isopods on the Great Barrier Reef found greater densities of isopods during the new and full moons. The moon is a critical environmental cue for many marine organisms. Moon phases dictate organismal behavior in order to create harmonious marine ecosystems.

Moonlight plays a crucial role in the spawning of coral by signaling many species to release their gametes at the same time. This event makes it more likely for species to find a mate and in some cases, keep predators away. Predators are less likely to be out in shallow waters when they are greatly illuminated by moonlight which makes it easier for larval fish to get food. Studies have also found that moonlight itself has the potential to increase growth of larval fish [8]. It is thought to prompt the release of the hormone gonadotropin which helps with gamete maturation [9]. However, when there is less light due to clouds or a phase change, larval fish are more at risk of being eaten by a predator or not growing as much. 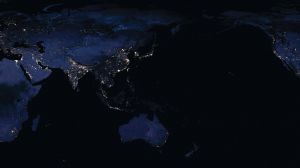 Artificial light at night can also have a negative effect on the reproduction of reef organisms and their survival. Organisms can mistake light pollution for moonlight and release their gametes at separate times or not at all. This light pollution has also been found to affect the early life stages of reef organisms in terms of their cell cycles, protein synthesis, and cell production. Coral reefs are fighting against many factors already including "climate change, coastal construction, overfishing, pollution, and nutrient enrichment" and light pollution is another thing that adds to the list [11].

The moon has the ability to influence the behaviors of many organisms that allow for them to grow to their full potential and help the reef ecosystem thrive. Without the moonlight shining, there would not be any cues letting reef species know the best times to hide, reproduce, or hunt. Unfortunately, the pollution of artificial light is continuously becoming more of a problem. Many organisms, especially coral, rely on continuous reproduction for the survival of their species as a whole. Light pollutants hinders the reef species' ability to correctly identify the signaling of the moonlight and in turn, poses a problem to the growth and development of many marine ecosystems. 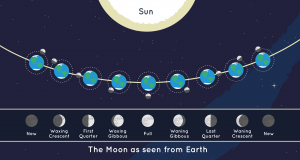 The moon cycles have an important influence on coral reef spawning. Coral activity levels are in sync with the moon cycles. When activity increases, coral reproduction increases as well. During the night of the full moon phase, coral are exposed to the longest period of continuous light. Moonlight suppresses the release of sperm and eggs from coral. As the moon changes from the full moon phase to the waning gibbous phase, the new darkness signals a mass spawning event.

Mass spawning events are beneficial in increasing the probability that fertilization will occur. Spawning occurs at night and may last up to a few days depending on the type of coral. To prevent breeding between species, different coral species spawn on different days. If fertilization is successful, they rise to the top of the ocean surface where they begin to mature before floating back down and setting on the seafloor. These events generally happen once a year but in certain areas coral spawn multiple times a year. This is likely due to other environmental conditions which are beneficial for spawning such as warm water temperature and tides.

The phases, light, and cycles of the moon create a powerful influence over the reproduction of coral reefs. It is crucial in the triggering of mass spawning events and ultimately the future of coral reproduction and livelihood. Despite their rapid decline due to climate change, coral is reported to still be spawning on schedule. According to the ReefTech research center in Australia, the coral reproduction event observed at the Great Barrier Reef in the fall of 2021, was a sign of hope for the livelihood of coral reefs. The future of coral reefs is still unsure, at the current rate at which carbon is being emitted and climate change is progressing, coral reefs will "be close to extinction in thirty to fifty years" [13]. If we are able to slow the increase of ocean temperatures and acidification, healthy coral will be able to continue mass spawning events and begin to repopulate.