A form of symbiosis that provides an obvious benefit to both the symbiont and the host. [1]

It is important to remember that the conditions for a healthy relationship between the coral and the algae have fairly strict boundaries as far as water temperature, ocean acidity, and amount of sunlight. Because the coral-algae mutualistic relationship is dependent on a variety of factors, it is difficult to define a clear benefit for the symbiotic algae. The relationship can be a "shifting continuum" that can "under specific conditions shift into parasitism." [3] As said previously, environment factors, such as increased temperature and dirty water, can strain the relationship between the coral and the algae. This strain can occasionally cause the costs of the relationship to outweigh the benefits.[2]

Corals are from the phyla Cnidaria [4] Because corals have a large area to volume ratio, the algae on the corals are able to absorb a lot of light for photosynthesis, given ideal conditions.[4] Over 700 species of coral have been found to be in symbiosis with dinoflagellate algae.[3] 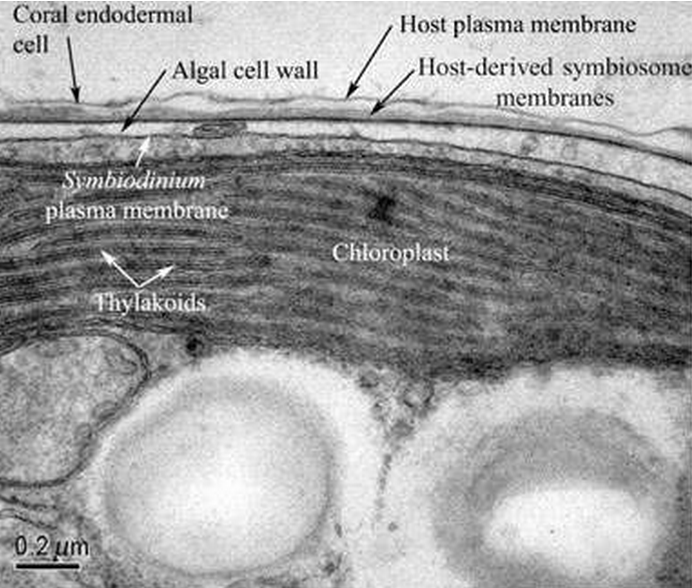 The contents of the algae cell are surrounded by the algae's plasma membrane and cell wall. Outside the cell wall is the symbiosome, which is a multiple-layer membrane complex that is derived from the host coral. The symbiosome is surrounded by the coral's endodermal cell and then the coral's plasma membrane. This multi-membrane structure means that the substances shared between the two organisms pass through multiple cell membranes.

Through photosynthesis, the algal dinoflagellates produce 90% of the carbon that corals need for calcification. [2]

Some coral species use the carbon from the algae to produce mucus. This mucus is important in feeding and in protection from mechanical damage and pathogens. [4]

The dinoflagellate algae release glycerol, sugars, organic acids, and amino acids. [4] These substances are all "mobile compounds, which are compounds that are translocated to the animal tissues. [4]

Algae enhances the growth of the calcium carbonate coral skeleton, which gives the coral stability for its health as well as its physical architecture. [2]

When the algae leaves the coral because of damaging environment conditions, otherwise known as coral bleaching, the corals suffer from the lack of support from the algae.[2] Impacts of bleaching include reduced growth and reproduction, increased susceptibility to disease and mechanical damage, and occasionally death of the coral. [4]

Corals help transport carbon dioxide from the surrounding seawater to the photosynthetic dinoflagellate algae. The algae needs the carbon dioxide in order to complete photosynthesis. [3] The coral has an enzyme that acidifies the boundary layer to convert carbon to carbon dioxide. This carbon dioxide diffuses into the host coral. It is trapped by conversion to bicarbonate and is then transported to the symbiosome of the algae. [3]

Corals provide the algae with a habitat.