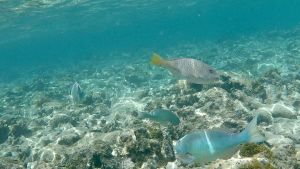 Parrotfish are a group of colorful, coral-eating tropical fish [1] in the family Scaridae. Parrotfish are named appropriately after their hard beaks which resemble that of a Parrot. The "beak" is made up of many small teeth packed very close together. At night they also utilize the method of spreading mucous from their mouths around their body with the goal of masking their scent from other predators. There are over 90 different species in the parrotfish family with the most common Caribbean species including: 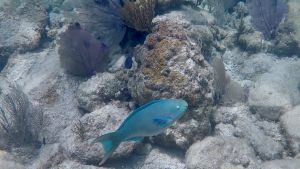 Parrotfish can commonly be found in shallow waters due to the abundance of coral in these regions. They are mostly found living in coral reefs in the Atlantic, Pacific, and Indian Oceans although they can also live near coastlines or in seagrass beds. The largest variety of parrotfish is within the Indo-Pacific.

Most Parrotfish are herbivores and do not eat meat. The largest portion of this fish's diet comes from algae that grows on rocks. However, Parrotfish are also known to eat coral and after their digestion it comes back out as the white sand found on beaches.[2] Parrotfish have been found to make over 200 pounds of this sand a year.[2] Although coral is important to their diet, no species of parrotfish consumes more than 50% of their diet from coral.

Parrotfish begin reproduction by a female fish switching to be a male parrotfish if there were not any already in the group. After a fish assumes the terminal phase as a male they will begin their reproduction process. Since Parrotfish are pelagic spawners they will release their sperm and eggs directly into the water column to be fertilized. After the eggs are fertilized they become a part of the plankton in the ecosystem and will float around until they end up settling in rocks or coral.

A commercial fishery does exist for some species of parrotfish.[3] However, parrotfish are caught throughout the Caribbean regardless in both local and commercial fisheries. The larger importance of these fish is that they keep coral reefs clean and healthy. Coral can be harmed by too much algae growth but due to the herbivorous diet of these fish the algae is constantly being checked and prevented from getting out of hand.

Parrotfish may not seem like a classic item on a menu, but they are still getting widely fished across the entire Caribbean for consumption purposes. In a 2021 study conducted by the Perry Institute of Marine Science, it was found that parrotfish are harvested by almost every gathering group examined in the Caribbean, whether it be local or large-scale fisheries.[3] When looking to identify why the parrotfish are caught, large-scale companies seem to catch parrotfish as a bycatch. However, it is also found that parrotfish are now more often being caught and relabeled as grouper in the distribution process.[4] Due to the overfishing tendencies of grouper and the persistence of a large demand for the fish, large-scale companies will often catch the similar parrotfish and simply relabel the species as a grouper to sell it to vendors and other distributors. As for small-scale gatherings such as local fishermen, there seems to be a mix of reasons for parrotfish being caught such as ease of catch and lack of choosiness.[3] But what seems to remain constant even in the local fisherman is the appeal of the parrotfish due to its similarities to the grouper. In the same Perry Institute of Marine Science study, many anecdotes of local fishermen were given, and in most, it was seen that the fisherman had no problem catching or eating the fish due to its similarities to the grouper.[3]

What are the benefits of this species to the environment/is there one? What happens when they are absent?

As for why we should work to maintain the presence of parrotfish in coral reefs, the answer is pretty simple. Parrotfish are a keystone species to the coral reefs, or in other words, an integral part of the ecosystem's survival. The parrotfish clean algae from the reefs, allowing for proper coral growth and support, and in a time like now where the corals are already struggling, they need the parrotfish's help more than ever. The loss of the parrotfish would indicate a stage in which algae would take over the reef substrate, disrupting not only the coral but the entire ecosystem.

We have seen some efforts to help maintain the parrotfish populations on Caribbean islands, such as a two-year ban on parrot fishing in the Dominican Republic in 2017, the longest parrot fishing ban ever.[5] We are also seeing organizations such as the Caribbean Marine Biodiversity Program do their best to work with local governments to work toward better parrotfish protection. There is also the United States Marine Sanctuary status which prohibits certain parrotfish traps and fishing.[1] Overall we are finding that there are small-scale attempts to inform the public of the dangers of parrot fishing, along with local legislation to aid in their protection, but this will not be enough. With grouper and parrotfish overfishing trends still on the rise, we will need a large-scale motivation to make the impact needed to save these fish along with the coral reefs.