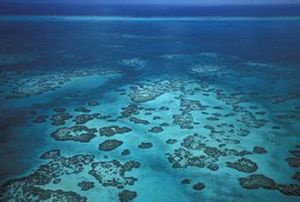 Patch Reefs are isolated outcroppings (patches) of coral that are in close proximity to each other but are physically separated by sand rings. They are typically found in shallow lagoons within a larger collective reef, or atoll. Patch reefs are found in waters with a depth of ten to twenty feet[1] [2] and are typically found in close proximity to land. Coral reef formation is restricted to a solid surface (such as rocky outcroppings and fossil coral ridges), and the patchy appearance is created as a result of the spaces between the solid surfaces[1]. As with all coral reefs, these reefs require sunlight, low turbidity, appropriate water temperature, and low nutrient levels.

Patch reefs are formed on rocky or fossilized coral outcroppings in ten to twenty feet of water.[1] Brain and star corals are typically the first inhabitants of patch reefs, and other hard and soft corals take residence there over time.[1] These corals grow because of the calcium carbonate skeleton that they secrete around themselves. As the corals grow, they grow upward and outward, and each polyp needs to move upward and outward as well. This occurs by laying down more calcium carbonate under themselves.[2]

Patch reefs have various shapes and sizes due to the variation in species of coral that are present and the size of the hard surface on which they grow. As the reefs mature, more species of coral will be present and increase the variability of the reef geometry. The sand rings that surround each patch are the result of the herbivorous fish that live in the patch reef as well as the invertebrates that feed on seagrass during the night. Surgeonfish are a good example of herbivores that consume macroalgae, while urchins are the main seagrass bed consumers. These fish and creatures eat the algae that grows on the coral as well as around the perimeter of the reef. They excrete what they do not use in nutrients as sand. [3]

Patch reefs are good at being nurseries for many reasons. Most reefs are good nurseries because they provide hiding places for young fish and have lots of available biomass for consumption and growth, but patch reefs are located in shallow water in an inner layer of a reef or atoll, shielding them from the large transient taxa[4] that can be found visiting the edges of reef systems. Because patch reefs are typically in lagoons, the water is calmer and it is easier for the initial phases and juveniles to move, hunt, and detect predators.

The patch reefs in St. John are located out in the center of the bays. Many fish are present at these reefs. Ballyhoo, needlefish, barracuda, jacks, and snapper are found in the upper water column. Wrasse and sergeant major can be found in the water column closer to the reef. Surgenfish, doctorfish, blue tang, parrotfish, angelfish, damselfish (longfin damselfish, beaugregory, bicolor damselfish, dusky damselfish), triggerfish, cowfish, grunts, trunkfish, trumpetfish, and goatfish are found close to brain coral and throughout the branching coral. Porcupinefish, night sergeant, squirrelfish, and blackbar soldierfish can be found in between rocks,under rock shelves, and in small caves. Blennies, gobies, and lizardfish are found sitting on the sand around the patch reefs. Chubs can be seen occasionally as they are moving through.

Usually, patch reefs occur within the lagoon behind the barrier or atoll rim[5] and are found in 10-20 feet of water[1]. These locations are quite common in the Caribbean islands and the Bahamas, as well as Bermuda, and the Pacific Islands. Because patch reefs are typically a part of larger reef systems, they are not recorded as individual reefs. This makes presenting the location of these reefs difficult.