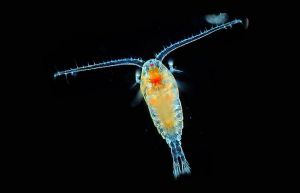 Photo taken by NASA from https://oceanservice.noaa.gov/facts/plankton.html

Plankton is a generic term for all microscopic plants, animals, bacteria, and organisms floating within the water column. These organisms are "marine drifters," meaning they are carried by tides and currents rather than by bodily motor forces or swimming. Despite their typical microscopic size, plankton are essential to the marine food web. Plankton can be categorized by trophic groups including phytoplankton, zooplankton, mycoplankton, bacterioplankton, and virioplankton. Among this list, phytoplankton and zooplankton are most prevalent and crucial to the ocean food web.

As photosynthetic organisms, phytoplankton perform photosynthesis to synthesize photons from the sun into energy, simultaneously taking in carbon dioxide and releasing oxygen just as terrestrial plants do. Alternatively, zooplankton describes all microscopic protozoans and animals who instead of producing their own energy, consume phytoplankton for survival. Because of their reliance on the sun's energy, phytoplankton typically reside near the surface of the water, whereas zooplankton are often found deeper in the water column where little sunlight is able to reach and predators are more easily avoidable [1]. In order for zooplankton to feed on phytoplankton, zooplankton vertically migrate to the surface at night. Subsequently, zooplankton and other predators release their carbon nutrient waste when they return to the deeper ocean. This process has coined the term, "the oceanic biological carbon pump," which is essential to the marine carbon cycle and shell-building organisms which rely on calcium carbonate [2].

Both phytoplankton and zooplankton are hypersensitive to environmental changes such as temperature, salinity, pH, and nutrient concentration of the water. Often, changes in plankton behavior and growth can indicate environmental issues which cause these changes. According to the National Oceanic and Atmospheric Administration, when the water is overly nutrient rich (in elements such as nitrogen and phosphorus), harmful algal blooms known as "HABs" or "Red tides" may arise. In this instance, algae (a type of phytoplankton) is disproportionately overgrown, which not only covers the surface of the water restricting sun exposure, but also influences the zooplankton which feed on them [3].

Why are Plankton Important to Coral Reefs?

Zooxanthellae is a single-celled, dinoflagellate, photosynthetic algae which can either live within the water column, or symbiotically within the tissue of other organisms, which is the case for coral reefs. Because of their photosynthetic nature, zooxanthellae is considered a type of phytoplankton that is housed within coral tissue. The evolutionary relationship between zooxanthellae housing in hard corals is symbiotic, meaning it provides benefits to both organisms. The photosynthesis of the algae creates energy and calcium carbonate substrate for the polyps to establish themselves and grow. According to the National Oceanic and Atmospheric Administration, the polyps house the algae, providing protection and compounds necessary for photosynthesis. Additionally, the zooxanthellae are what give corals their vibrant colors and textures. Corals are unable to survive without zooxanthellae for extended periods of time [4].

Coral Bleaching and the Expulsion of Zooxanthellae 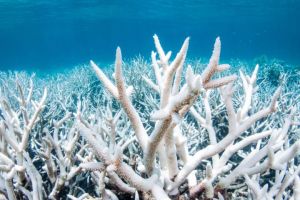 Coral bleaching occurs when corals are stressed by an environmental change, causing them to expel the zooxanthellae housed within their tissue. Without this symbiotic algae, the corals’ tissue becomes transparent, leaving their white calcium carbonate skeleton exposed. Though this does not immediately kill the coral, the loss of this algae leaves the coral without their primary food source, leaving them at a higher risk for starvation and disease. If the environmental stressor persists, the coral will not accept the algae back into its tissue, and it will eventually die [5].

The main cause of coral bleaching is rising ocean temperatures caused by climate change [5]. As the ocean absorbs more and more excess heat from increasing greenhouse gas emissions, water temperatures continue to rise. Water temperature increases of only one or two degrees celsius for as little as four weeks can trigger bleaching, and the detrimental effects are difficult to reverse. Corals can bleach for other reasons as well, such as extremely low tides, pollution, or excessive exposure to sunlight.

Role of Zooplankton in Bleaching Recovery

While the coral may appear to be dead after expelling the zooxanthellae, many corals have developed different recovery methods to help recover from a bleaching event. Although many corals do not end up recovering, some can recover from bleaching by increasing their consumption of zooplankton in order to compensate [6]. This altered feeding behavior allows them to still acquire energy despite the loss of their primary food source. If a bleaching event is short enough that the corals can feed on zooplankton in order to sustain themselves, when the water temperatures return to normal, they can regain their symbiotic relationship with zooxanthellae and begin feeding like normal.

If, however, the environmental stressor persists, the coral cannot permanently sustain itself just from feeding on zooplankton and will eventually die of starvation.

Other Reef Related Organisms and Plankton

Many organisms other than coral depend on plankton for food and are the base of the marine food chain. Phytoplankton is even consumed by zooplankton, which is then eaten by planktivores. Planktivores reside within and outside reefs and rely on plankton as their main source of food. Many of these creatures have evolved special adaptations to grab the microscopic organisms. Reef fish have modified color patterns, slender bodies and are fast to increase survival when adventuring away from their coral crevices into open currents. Damselfish, Wrasses, and Snappers are well-known planktivorous reef fish [7]. Even creatures as small as the Christmas Tree Worm partake in the plankton feast through filter-feeding [8]. Bigger fish feed on the planktivores and some even eat plankton themself! The iconic Whale Shark feeds almost exclusively on plankton by filter-feeding and reigns as the largest fish on reefs. These small organisms play a big role in the marine ecosystem, and without them, the food chain would be nonexistent.