The Plate Tectonics reef formation theory arose well after Darwin's theory in response to the increased knowledge of the earth's crust. Broken into many uneven pieces known as plates, the earth's crust is not a solid, unchanging mass, but instead, very dynamic. The movement of these plates against each other causes many geological events and phenomenon including the formation of mountain ranges, oceanic trenches, earthquakes, and volcanoes. The reef formation theory explains the growth, decline, and location of coral reefs by the interaction of the tectonic plates.[1]

It is important to note that Darwin's theory and the plate tectonic theory are not incongruent. While Darwin connected the three classifications of reefs as stages of reef formation around a submerging island, plate tectonics explain how those islands came about and submerged. Reef formation theory also extends to explain the growth and decline of Darwin's reefs in response to the sea level changes caused by shifting plates, sea-floor spreading, and subduction. Healthy reefs rely on a certain level of sunlight. If the formations are slowly submerging, the corals may experience a period of upward growth to maintain consistent sunlight. If the submergence is too fast, the reef may die.[1]

What are Plate Tectonics?

The earth's crust is broken into 9 large plates and many smaller ones.[2] Plate tectonics are the movements of these plates towards (convergent), away (divergent), or against (transform) each other.[1] 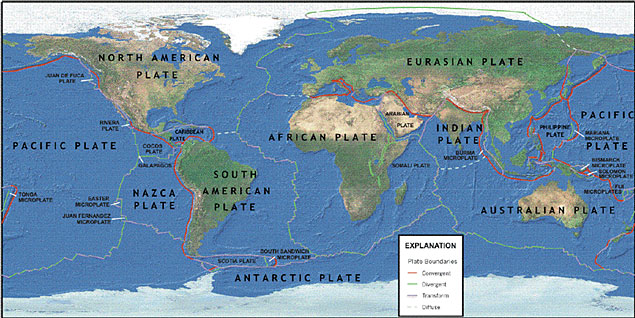 Convection Cells Very simply, the earth consists of a solid radiating core, a solid outer crust, and the asthenosphere, a layer of "hotter, softer, more malleable rock" between the core and crust.[3] In this layer, rocks near to the earth's core are heated, becoming less dense. They slowly rise toward the earth's surface while the cooler rocks fall towards the core. This cycle creates slowly moving currents in the asthenosphere. These currents are the driving forces of the plates' movement, slowly shifting a few centimeters a year.

Convergent Plates Two plates that move towards each other are known as convergent. One plate dives under the other into the asthenosphere where the crust is melted and recycled.[1] This "subduction zone" creates deep oceanic trenches. Oftentimes, small islands are formed from escaping molten lava.[4]

Divergent Plates Two plates that move away from each other are known as divergent. As a gap forms between the plates, hot magma rises, forming a ridge of new crust that spreads out into the sea floor. The Mid-Atlantic Ridge (running down the middle of the Atlantic Ocean) is the result of the divergence of the North and South American plates from the Eurasian and African plates and is the largest mountain range in the world. [4]

Transform Plates Two plates sliding horizontally against each other are known as transform and are often known as faults. Earthquakes most commonly result from these colliding boundaries. [4]

How Plates Can Explain Coral Formation

Look back at the map of the plate boundaries and notice the activity in the Caribbean and Indo-Pacific, the home to the vast majority of the world's coral reefs. The formation of coral reefs near the plate boundaries is not a coincidence. The volcanic activity resulting from these plate interactions has formed islands, ridges, and underwater platforms that corals have colonized. [5] The formation of islands far from these boundaries can often also be explained by plate tectonics. Hotspots, or "huge columns of upwelling lava called 'plumes'", sit underneath a tectonic plate and push up through the crust.[6] As the plate moves over the spot, new volcanoes form a chain of islands. The Hawaiian Islands, located on top of one of these hot spots in the center of the Pacific Plate, formed in this manner. [7]

As is outlined in Darwin's theory, the cooling, condensing, and subsiding islands are prime real estate for coral larvae.[5] 57% of the waters around Hawaii's biggest island is covered in live corals. [8]