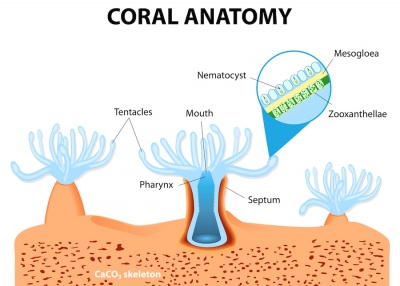 Zooxanthellae is the name given to a wide array of different algae of the genus Symbiodinium [1]. This specific clade is primarily found in symbiotic relationships. Zooxanthellae are part of the group Dinophyta, which are single-celled mixotrophic microorganisms. [2]

This class of organisms has two flagella, one transverse and one longitudinal. The longitudinal flagella is used as a rudder for directional steering. The transverse flagella is used for propulsion. It is two to three times the length of the longitudinal flagellum and is composed of axoneme, which causes the organelle to take on a striated form (like a ribbon). The flagella possess mastigonemes (small flagellar hairs). Dinoflagellates use thecal plates as a method of defense against predators. Theca are armor-like plates on the exterior of the cell that are composed of cellulose. Note: individuals may not have thecal plates at all stages of their life cycle.[2]

The genetic load of a dinoflagellate is unique to members of this group. Within the nucleus, the DNA is not organized into nucleosomes, and histone proteins are absent. However, the chromosomes are always condensed. Remarkably, the genome size ranges from 3,000 to 215,000 Mbps. Comparably, the entire human genome is closer to the 3,000 Mbp mark. While the majority of the dinophyta genome is non-coding, it is thought to have a structural function. [2]

These organisms are highly under-represented in the water column. With higher competition, predation, and variable nutrient availability, the zooxanthellae do not fair well in open waters. Instead, a large majority of zooxanthellae form symbiotic relationships and live within host organisms[3]. Typically, the host organism captures the algae but does not digest. The algae makes it to the epithelial layer of the organism where it can make the most of the light availability. The relationship between zooxanthellae and corals is thought to have evolved from a single adaptive radiation event, however the different species or clades of symbionts that live together in the same coral as well as at different depths and light intensities complicates the simple idea of co-evolution with their host. Corals can gain zooxanthellae through the environment and/or from the parent colony. [1] This symbiotic relationship has been observed in Cnidarians (Coral Polyps, Jellyfish, Sea Anemone) as well as in Nudibranchs (Sea Slugs).

Corals provide a safe environment for the zooxanthellae to photosynthesize. Since the algae are within the polyp, any action to reduce predation upon the coral will also benefit the symbiont. Corals gain nutrients and materials through feeding, providing the algae with the nutrients needed for photosynthesis. In return, the zooxanthellae provide nutrients, such as glucose, glycerol, and amino acids, for the coral to use in order to grow and create a calcium carbonate skeleton. Up to ninety percent of the photosynthetic products produced by zooxanthellae is transferred to the corals, driving their growth. Oxygen, another byproduct of photosynthesis, can be used by coral polyps with waste removal. [3].

Zooxanthellae are also known to aid in CaCO3 formation.[3] Through uptake of CO2, the algae raise the pH of the surrounding environment. The ability to rapidly create these calcified skeletons and the metabolic advantages from the photosynthesis allow zooxanthellae scleractinian corals to grow quickly and construct dominant reefs in tropic waters.[4]

This symbiotic relationship has lasted for more than 200 million years. It is believed that lateral gene transfer has occurred between the two organisms. From this, there is a specific host/inhabitant preference for specific varieties of zooxanthellae. This relationship is the reason for the variation in color patterns among corals.[2]

Bleaching occurs when environmental stress adversely affects the mutually beneficial relationship between the host organism and its zooxanthellae. Several factors, many of them related to human activity can cause the zooxanthellae to be expelled from the coral polyp. The coral then loses all pigment and appear bleached, because the zooxanthellae are responsible for coral coloration.[2].