Difference between revisions of "Acidification" 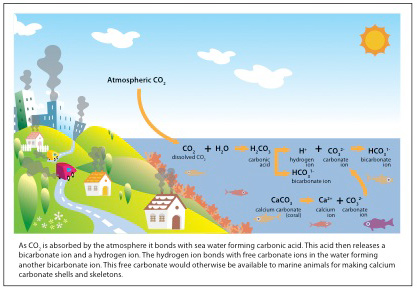 Ocean Acidification is defined as the process by which the acidity of ocean water increases, as pH lowers, due to an increase in the burning of fossil fuels by human industrialization. This causes an increase in carbon dioxide in the atmosphere, which is then absorbed by the ocean, leading to an imbalance in the chemistry of ocean water, which results in the pH lowering. This process has severe implications for marine ecosystems.

Ocean Acidification results as the equilibrium of oceanic chemistry is disrupted when increasing atmospheric carbon dioxide is absorbed by the ocean and reduces the pH of the water. This occurs through a chemical intensive process. Initially, carbon dioxide reacts with water to form carbonic acid. The carbonic acid further reacts to create bicarbonate and a hydrogen ion, which increases the acidity of water. The extra hydrogen ions then bond with the carbonate ions that are in the water, reducing the amount of carbonate available in the ocean. 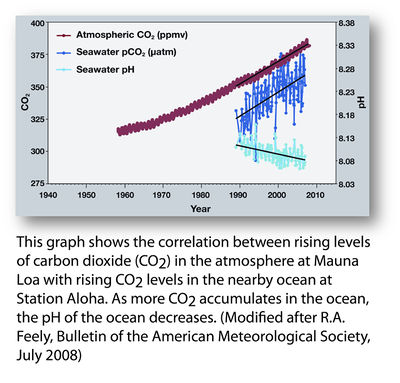 Ocean acidification can have a lot of effects on the ocean ecosystems. Coral Bleaching is one potential effect that results when corals lose their zooxanthellae due to altering environmental factors. Zooxenthellae are the symbiotic algae that reside in coral colonies and provide them with the ability to perform photosynthesis and gain energy. 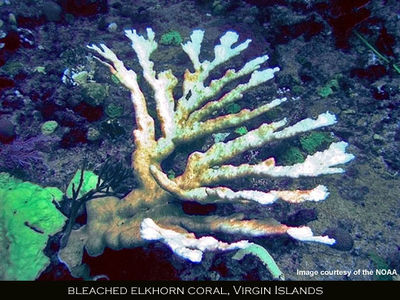 A Bleached Coral in the Virgin Islands (http://www.global-greenhouse-warming.com/coral-bleaching.html)

Other effects on corals can include a reduction of photosynthesis activity even when the corals are not bleached. In other words, even small changes in water chemistry, can disturb the coral, whose response is to perform less photosynthesis. Again, this means that the corals can not obtain any energy and therefore are stranded without any means for growing. [3]

Another major effect of ocean acidification is a reduction in calcification. This can lead to decreased linear extension rates and reduction of skeletal density, so that either the corals grow slower than usual or they begin to form less dense calcium carbonate skeletons. A less dense skeleton can lead to an increase in grazing damage by organisms and turbulence as the skeleton is much weaker. Finally, the acidification can lead corals to expend a greater amount of energy on calcification because there are less carbonate ions in the water for the corals to use as part of their skeletons. These factors add up to make it especially hard for the corals because they not only experience a loss of energy intake, but also require more energy to make their skeletons. [1]

Ocean acidification is not a process that will naturally end. Because we continue to emit carbon dioxide this problem will continue. Therefore, it is necessary for us to understand how we can slow down and prevent these effects on reef ecosystems. Preventing future ocean acidification and reducing the harmful effects that it has on coral reefs starts by realizing that a large percent of CO2 emissions are emitted from urban areas. Reducing the population's carbon footprint is something that each individual can work to improve. Collecting seawater CO2 level data, monitoring urban and agricultural runoff, and starting citywide programs to reduce greenhouse gas emissions are a few of the steps being taken to counteract this growing problem. In addition, nationwide and even global programs for reducing carbon dioxide emissions are important in preventing further acidification of our ocean ecosystems. [12]