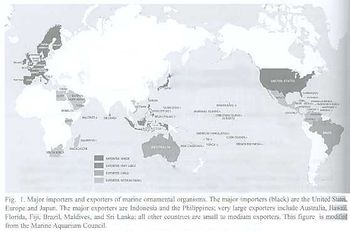 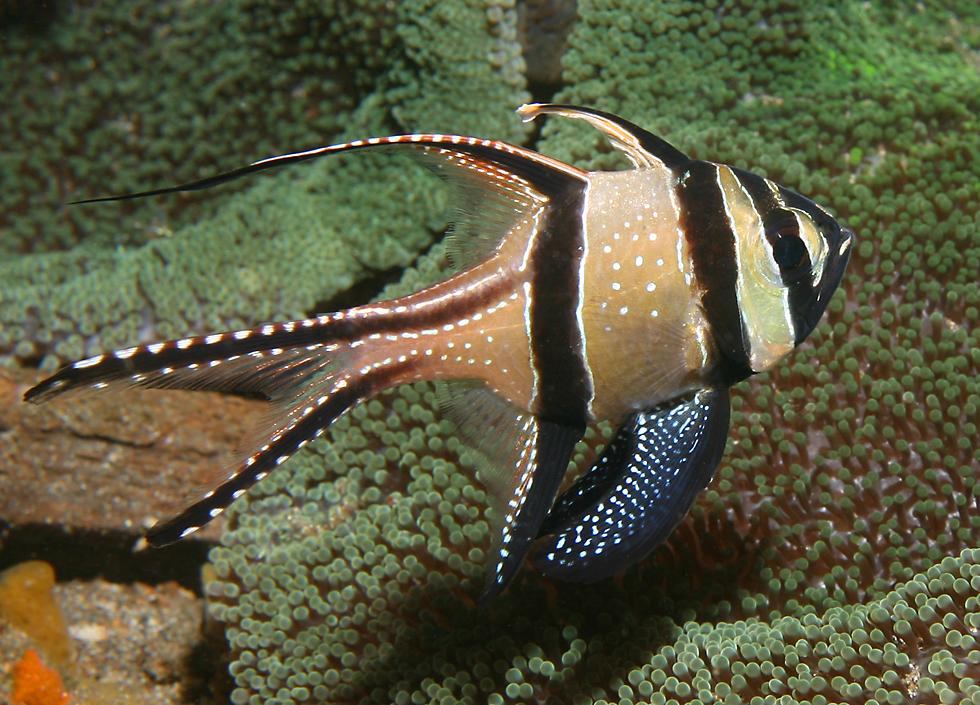 </ref> A study conducted in the Banggai archipelago of Indonesia showed that it is not necessarily destructive fishing practices such as cyanide and dynamite fishing that produces the negative impact on wild populations. [6] The study selected 8 different locations under varying fishing pressures and monitored population density, age distribution and habitat quality for each of the locations. What was found was that there was a negative impact on fish density and a significant negative impact on group size for both the Banggai cardinal fish and an organism that it closely interacted with, a species of sea urchin. [6] It was also discovered that traps with sea urchins in them were used to catch fish, and both populations were effected as a result. [6] While the practice is labeled as not destructive, it clearly harmed both species, as both populations suffered from the practice.

The aquarium trade has been shown to negatively affect ecosystems indirectly as well as directly through poor fishing practices. The industry is a potent source of exotic species invasion into non-native habitats.[3] [7] Aquarium species that are released accidentally, as in the case of lionfish, or intentionally by owners who have decided that they don't want their exotic pets anymore, have the potential to survive and reproduce in a predator-free environment. Because these species are released in waters in which they are not native, no predators have yet evolved to curb population growth; if an exotic species released through the aquarium trade somehow finds itself in favorable conditions to survive and proliferate, their population will grow exponentially and could threaten the ecosystem they have invaded. Invasive species are dangerous to ecosystems because they can throw off naturally occurring food webs, disrupt trophic interactions between native organisms, and thus affect species composition balance. One of the biggest issues involved with this particular invasion pathway is that it often goes unnoticed, frequently overlooked in favor of more prevalent invasion pathways, such as ballast water. Additionally, re-release regulation and accidental releases are both hard factors to control when thinking about management solutions.

One of the most notable examples of the aquarium trade serving as an invasion pathway is the lionfish. The first documented lionfish sighting off the coast of non-native North Carolina was in 2002. [8] The release was originally thought to be insignificant as a threat because the latitude that far north was thought to get too cold in the winter for the lionfish to survive—they thought they would be go locally extinct before any significant damage occurred. However, since 2002, the lionfish population has steadily increased. [8] During a 2004 research expedition, NOAA scientists collected 155 lionfish at 19 different locations off the North Carolina coast during the summer alone. What was startling was that lionfish smaller than those sold for aquariums were spotted, indicating that they were thriving and breeding.

It is hard to tell usually how a species will adapt to its new environment, and little is known how native species will adapt to the new species of lionfish. However, lionfish are believed to pose risks to reef communities because of their predation of economically and ecologically important species. [8] In addtion, native fish do not have experience dealing with lionfish, which could make it a more effective predator. [8]

The invasion is so widespread that it is feared that it cannot be halted in the southeastern United States, as large scale removal is expensive and impractical, but there may be hope for the Caribbean area, as the invasion is not as threatening in that region. [8] It is likely that because they have essentially no limiting factors to their growth, lionfish populations will continue to grow. [8]

One management solution to the problems that aquarium trading imposes on aquatic systems is to continually check reefs. Reef check programs check "indicators" of ecosystem health, usually a select group of species, and monitor them to determine the health of the reefs at different locations.[9] The reef check program is active in more than 300 reefs in 31 countries, [9] but it is by no means a global effort to monitor all reefs. If this management method were to show promise, a more comprehensive monitoring system will be needed.

Another method to prevent destruction of reef habitats via aquarium trading practices and manage their impact is through quarantine methods. This means essentially to quarantine areas in which exotic species have invaded to limit the effected area and halt the spread of the invasion. With this method, it is necessary to locate hot spots of non-native species in order to maximize the effectiveness. [7]