Demand and Use of Coral: Business Behind the Trade

The coral trade has been around for ages and is nearly impossible to trace back to a single event or time period. From the first days that humans discovered the underwater world of coral reefs, they were fascinated by it, and owning coral was made into a status symbol. In the 19th century, it was customary for young English gentlemen to spend a few months, even years, on a “grand tour” of Europe, returning home with mementos that might have included trinkets of coral from a Neapolitan community at the foot of Mount Vesuvius. Convinced that it warded off evil spirits, the Victorians, like the ancient Romans and Egyptians, prized Corallium rubrum, the precious red coral species found in the deep waters of the Mediterranean. Coral continued to enjoy a special place among jewelry and fashion lovers, until fairly recently.[1]

Current Views on the Coral Trade:

Today, some jewelers have stopped using it, worried about the environmental effects that the trade has had. Campaigners also want to offer red coral more protection from over-harvesting. But others, particularly those who rely on coral for their livelihood, believe they should be allowed to continue working with the beautiful species, in a sustainable way.

Tiffany, the high-end U.S. jeweler, stopped selling coral in 2002. Other companies like Stephen Dweck and Temple St. Clair have since followed suit.Tiffany signed on as a sponsor when the nonprofit group SeaWeb, based in Maryland, started a “Too Precious to Wear” campaign to promote coral conservation in January, 2008. Yet not every jeweler sees the issue in the same terms. Robert M. Taylor, president and chief executive of Maui Divers Jewelry, the largest jewelry retailer in the Hawaiian Islands, said he believed in coral conservation. However, he took issue with the “Too Precious to Wear” campaign’s core message that corals are in crisis, suffering from high consumer demand and, hence, should not be used in jewelry. “It’s the opposite of what we feel,” he said. “Precious coral is too precious not to wear.” [2] 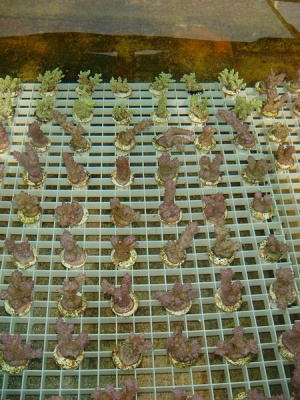 Unlike the Corallium (pink and red coral) which is the target of the SeaWeb campaign, the precious black coral that makes up the bulk of Maui Divers’ coral sales is already listed on Appendix II of the Convention on International Trade in Endangered Species, known as Cites. The listing does not ban the sale of black coral; it does, however, mandate a strict reporting regime designed to prove that trade is “not detrimental” to the species’ survival in the wild, making it hard to enforce and monitor.

Uses of Coral Beyond Jewelry

Coral is used for a variety of different things, from jewelry, as mentioned previously, to construction, medicine and is traded amongst avid aquarium collectors. On the international level, the U.S. imports more coral for aquarium use than any other country. While coral jewelry sales are on the decline, the live trade of coral for aquariums is continuing to rise in popularity.

There is a current shift to aquaculture instead of wild harvesting. Particularly in Indonesia, the world’s largest supplier of stony corals and home to more coral reef areas than any other nation, many producers have “learned that if you collect a really beautiful, interesting coral, if you export that, you get to export it one time,” Dr. Rhyne said. “If you keep it and farm it, you get to export it forever.” 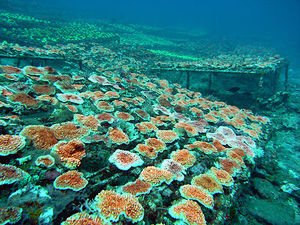 Aquaculture of coral off coast of Indonesia [5]

As far as coral as a building material is concerned the most popular use on land is coral rag. The corals provide lime for use as building blocks. Coral rag is an important local building material in places such as the East African coast. For more on this, see the article on <CoralMining|coral mining]]

Coral is also used in medicine. The pharmaceutical company, Bristol-Myers Squibb, has licensed and patented a chemical from the coral Elutherobia called eleutherobin. Eleutherobin is able to bind a protein material within cellular structures called microtubles and make them extremely rigid, a process that prevents cancer cells from dividing. It works in a similar manner to taxol, a recent breakthrough in breast and ovarian cancer. Coral is also used for bone grafts using a product named hydroxyapaitite (HA), made from the exoskeletons of marine coral. HA is similar in structure to bones in humans. This product is used to fill voids from trauma and fractures to upper portions of the long bones. The FDA approved the HA product known as Pro Osteon Implant 50 made by the company Interpore International in 1992. When implanted into a void, the web-like structure allows it to surround the bone and fibrous tissues to infiltrate the implant, and it becomes a part of the body biologically. [6]

Coral reef creatures and coral are often captured and kept alive for the exotic pet trade. Fish are often exposed to physical and mental damage during the trade process. These symptoms are characterized as “post traumatic shipping disorder.” In response, many fish exhibit hormonal effects. In a recent study, marine biologist researched a group of seahorses shipped to an aquarium. They took blood samples, and the samples tested positive for an increase in cortisol, also known as the stress hormone. The seahorses also tested for an increase in level of glucose in the blood stream and a decrease in serotonin. All of these symptoms are indicative of stress. The increase of stress levels can lead to depression, loss of appetite, illness, and sometimes death. [7]

According to Stephanie Yue Cottee, a researcher at the University of Guelph in Canada, the average animal survives no more than 8 months in an aquarium setting, and by then the animal has already suffered a significant amount of pain, fear, and distress. The Hawaiian reefs are a huge pet trade hub and each year, approximately 15,000 fish die before they can even be shipped out of Hawaii. Often times there will be an number of yellow tangs found in the dumpsters of these trading markets. The number of fish deaths is based on officially reported numbers, but many experts think the actual mortality rate is two to five times higher. [8] Given that fish exhibit these chemical, hormonal, and other effects, it is reasonable to conclude that corals and other reef creatures experience similar symptoms. [9]

Executive Order no. 13089 for the Protection of Coral Reefs On June 11, 1998, President Clinton issued the Executive Order 13089 on Coral Reef Protection. This executive order strived to “preserve and protect the biodiversity, health, heritage, and social economic value of U.S coral reef ecosystems and marine environment.” This order also established the U.S Coral Reef Task Force, co-chaired by the Secretary of Interior and Secretary of Commerce through the National Oceanic and Atmospheric Administration (NOAA).

The U.S Coral Reef Task Force was responsible for duties and responsibilities, listed below.

Convention on International Trade in Endangered Species of Wild Fauna and Flora (CITES) The World Trade Organization has been trying to implement a couple policies; however, because of the widespread culture of coral reef trade it is still hard to regulate. Policies include, creating incentives for responsible collection management, random fish testing through establishing cyanide testing facilities, charge more export fees, and develop on replenishment reserves for coral reef animals and creatures. [11]

For more information about regulations related to coral reefs, please visit the page on Laws and Regulations About Coral Reefs