Difference between revisions of "ENSO"

The warm water brings with it rain and warmer temperatures and promotes vegetative growth upon the otherwise dry landscape. The warm water, if it becomes entrenched, can block normal upwelling off the coast of Peru, and organisms that depend on the normally nutrient-rich waters suffer. [1] One half of what is called the Southern Oscillation (La Niña is the other half), El Niño is now understood to be a major player in the world's weather. Strong El Niño years are often marked by flooding in the western United States, droughts in Australia, and colder than normal temperatures in Europe.[1]

Normally, the waters off the coast of Peru are fed by the cold, nutrient-rich Peru Current, and the area is characterized by high atmospheric pressure. This high atmospheric pressure drives easterly trade winds west towards Australia along the equator. The trade winds push surface water west, and even cooler, more nutrient-rich water is brought to the surface through upwelling. Along its journey towards Australia, the water warms, and, by the time it reaches the tropical western Pacific, the warm water fuels atmospheric convection. This convection spills northward, aided by the Coriolis Effect, and helps to transfer heat energy from the equator toward the pole. As the water moves northward away from the equator, it cools, and westerly trade winds develop at higher latitudes. This movement of air and water is known as the Walker Circulation. [2]

In strong El Niño years, the process can be reversed. Warm waters off the Papau New Guinea, often at depth, can be blown eastward by strong westerly winds. This then triggers the warming of water off the coast of Peru. [3]

Complementing (or perhaps complicating) the atmospheric processes discussed above are coupled, oscillating oceanic waves called Kelvin waves and Rossby waves. Rossby waves are associated with upwelling and transport cooler water, moving westward along with the trade winds. Kelvin waves are associated with downwelling and transport warm water, moving eastward toward the coast of South America. Rossby waves eventually hit the western boundary (coasts of Australia and Indonesia), and then rebound as a Kelvin wave headed back to South America. The downwelling Kelvin waves [4] act to suppress the normal upwelling process. Due, once again, to the Coriolis Effect, Kelvin waves travel about 3 times faster than Rossby waves. During an El Niño event, the slackening trade winds allow the eastward Kelvin wave to transport larger amount of warmer water, which, in turn, reinforce the abnormally high amount of warm water in the eastern Pacific. If Kelvin waves and Rossby waves travelled at the same speed, it would be difficult for more normal (non-El Niño) conditions to return. It is this variance in the speeds of the oceanic waves that help break the feedback loop. [5][6]

The eastward progression of a Kelvin wave from 2010. Note the red blob moving east over time[6]

El Niño events result in exceptionally warm waters in the Indo-Pacific region where many of the world's largest and most biodiverse coral reefs exist. Even in the Caribbean, El Niño events are correlated with above-normal sea surface temperatures. [7] Higher sea surface temperatures can lead to mass bleaching events and increased disease. Particularly powerful El Niño events in 1982-1983 and 1997-1998 resulting in mass bleaching of coral reefs and subsequent coral mortality throughout the globe.[8][9][10]

Coral reefs were also significantly affected by the 1997-1998 El Niño. Coral bleaching events occurred across the world. One study focused on Channel Cay in Belize, looked at coral cores to see the damage this region. These cores showed that the 1997-1998 event had caused the most coral mortality in the last 3,000 years. The lettuce coral, a common coral to the area, was almost eradicated by this El Niño, which caused extremely elevated sea surface temperatures.

The current El Niño is working its way to be just as strong as these two. As a result of the 2015 El Niño, NOAA put out a news release about the "third ever global coral bleaching event" on October 8, 2015. To read more, go to [1].

A great web page about the 2015-2016 El Niño event: https://wunderground.atavist.com/el-nino-forecast

The Great Barrier Reef is known to have 400 types of coral and over 1,500 species of fish. Death of coral affects the entire reef ecosystem. According to UNESCO (United Nations Educational, Scientific and Cultural Organization), the Great Barrier Reef is home to one of the most complex and diverse areas in the work, making the protection of this area a chief concern. 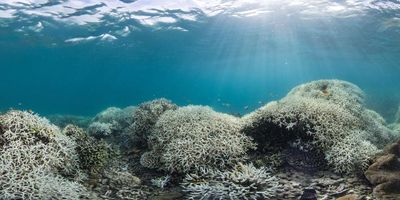 NOAA tracked sea surface temperatures and the amount of coral bleaching across the world. Starting in the beginning of 2015, NOAA documented coral bleaching in Guam, the Commonwealth of the Northern Mariana Islands, Hawaii and the Marshall Islands. By the middle of 2015, corals were bleached throughout the south and eastern central Pacific. By the end of 2015, coral bleaching was documented in the Caribbean as well. NOAA deployed aircrafts, weather balloons and a research vessel to conduct as much research as they could about the current 2015-2016 El Niño.

Another organization, the National Science Foundation, has also gotten involved in research in 2016. NSF awarded 13 research grants to different universities in the U.S [16]. They want to study the general effects of El Niño while also focusing on its damage to coral reefs. Biologists want to find the components of coral reefs that are the most at danger during strong El Niño years. For more information of the 13 studies, go to this website: http://www.nsf.gov/news/news_summ.jsp?cntn_id=137507

Daniel Rudnick, an oceanographer at the University of California, San Diego, and his colleagues received grants from the NSF and NOAA in 2012 and 2013 to deploy a trio of underwater gliders in the tropical Pacific from 2013–16 [16]. The team also released 41 new Argo floats — roughly double the previous number — along the Equator to collect temperature and salinity data down to 2,000 metres.