Natural events such as hurricanes, cyclones, earthquakes and tsunamis cause significant damage to coral reefs. The wave activity caused by earthquakes and tsunamis cause extreme mechanical damage to corals, breaking apart their structures. Sedimentation and turbidity can limit the amount of sunlight that reaches the corals, flooding can increase depths for corals, and nutrient run-off can change water dynamics such as pH and salinity. Branching corals are usually the most susceptible to damage from storms and wave activity, because the ends of the corals break off very easily. However, natural events rarely cause total loss of reefs, like human-induced events can, because disturbance is a natural part of coral reef ecology, and reef species have adapted. [1]

1. Mechanical Damage: Direct damage to corals and coral reefs occurs mainly as a result of the mechanical forces exerted by the storm-induced waves and currents. Many of the problems caused by tsunamis and earthquakes are caused by mechanical damage to the corals. The pieces of coral that break off from wave action cause both changes in sedimentation processes and increased turbidity. Broken coral pieces also disrupt benthic assemblages lying on the floor of the ocean. Large pieces of coral can uproot soft benthic organisms as well. The increase in sedimentation also causes increased turbidity. Coral resistance: some corals, such as brain corals, are more susceptible to mechanical damage than many other species of corals. [2] 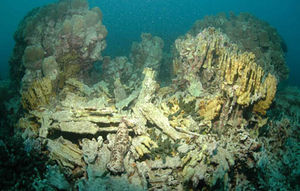 Mechanical damage from an earthquake [3]

2. Damages Due to Changes in Sedimentation Processes: Mechanical damage to coral reefs and wave action during tsunamis and earthquakes causes an increase in coarse sedimentary material from broken corals and uprooted soft benthic organisms as well as a redistribution of existing sediments. Increased sedimentation can (1) smother marine communities and in severe cases, completely bury them, leading to suffocation, of not only corals, but mangrove stands and seagrass beds as well, (2) decrease the amount of available sunlight which may in turn limit the production of algae and macrophytes, increase water temperatures and reduce growth of natural vegetation, and (3) damage fish by irritating or scouring their gills and degrade fish habitats by reducing available oxygen. A decrease in sedimentation can also be problematic, because a lack of sediment can also deprive an ecosystem of the minerals, nutrients and organic matter needed to sustain production. Some corals have the ability to remove sediment from their outside coating, but this puts extra stress on the already harmed corals. Coral resistance: corals have the ability to remove sediment from their "skin," or outer layer, however this removal process expends a lot of energy on the coral's part, making them more weak. Also, the skin can only be removed for a small amount of time, so this form of resistance is only temporary. [2]

3. Damage Due to Increased Turbidity: One of the main requirements of healthy coral reefs is clear, clean water. This is essential to the important symbiosis between coral and zooxanthellae. The zooxanthellae uses photosynthesis to provide the coral with food. With decreased sunlight, it is harder for the zooxanthellae to produce food, essentially starving the corals. Also, if the corals become stressed from other factors such as decreased salinity in addition to a lack of sunlight, the coral polyp could expel the zooxanthellae, which in turn usually kills it. Earthquakes and tsunamis cause sediment to mix into the water, decreasing the amount of light that can reach the already damaged corals. [2]

4. Damage due to Decreased Salinity and Imbalance of Nutrients: Extreme flooding caused by tsunamis can cause significant change to the salinity and nutrient levels in coral reef waters. Flooding near coral reefs causes nutrients and waste from the land to seep into the water from the land surrounding the corals, causing the imbalance of nutrients in the water and decreased salinity. Corals require a specific nutrient level, pH level and salinity to survive. Flooding of surrounding waters changes the nutrient, pH and salinity levels, causing extreme stress to the surrounding corals. [2]

5. Damage Due to Change in Sea Level: Changes in tidal flow and a fall or rise in sea level can also cause severe damage to corals. If sea levels rise, the corals could find themselves at an unfavorable depth. This new depth can change the temperature that the corals are in, and can severely alter the amount of sunlight that can reach the coral. As said before, decreased sunlight makes it harder for the zooxanthellae to make food and starves the corals. Conversely, if sea level drops, the corals can be exposed to much warmer water that they aren't used to, or, even worse, they can be lifted out of the water and exposed to direct sunlight. The corals can essentially become "burnt" by the sun and become too stressed to survive. Some corals are able to develop a protective coating around themselves to combat against a drop in sea level. However, the corals can only maintain this outer coating for so long and with other stressors that come with earthquakes and tsunamis, such as extreme mechanical damage, the corals can become too stressed to develop and maintain this coating and die altogether. Coral resistance: a coral develops an outer "coating" to combat sea level fall, however the coral can only maintain this coating for a certain period of time before it wears off, thus rendering the coral more susceptible to damage due to change in sea level. [2] 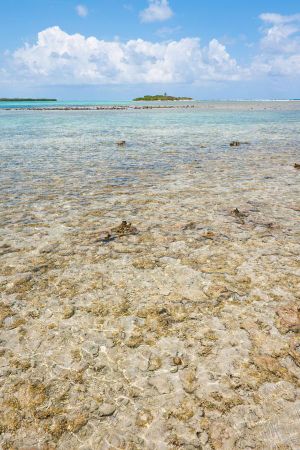 a damaged coral reef due to change in sea level [4] 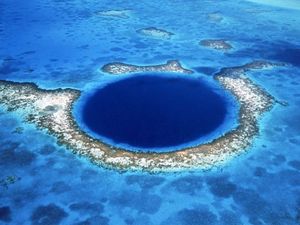 The Great Blue Hole of the Belizean Barrier Reef [5]

In May of 2009, a powerful magnitude 7.3 earthquake hit Honduras and caused widespread damage as far as the Belizean Barrier Reef. Prior to this event, two dominant species of coral were completely eradicated from other causes but the loss of these species made the young, new dominant coral less resilient to the earthquake's destruction. [4] The earthquake destroyed ten benthic assemblages in the Belizean Barrier Reef and destroyed another by causing avalanching of slopes within the reef. Avalanching of reef slopes is when reef debris attaches to another part of the reef, then breaks apart into many many pieces. The reef is then surrounded by a debris field, consisting of complied reef debris. During the earthquake, benthic organisms were removed and buried by the uplifted sediment. Only sediment and skeletal debris remained afterwards, and the living cover in coral decreased by sixty percent. [6] This catastrophe caused an extreme change in the coral reef's ecology and community, causing widespread damage and dieoff within the reef. Scientists estimated the recovery time of approximately 2,000 years [6]. This is an example of a series of unfortunate events. Richard Aronson, of the Florida Institute of Technology explains that “The prior losses of both staghorn and lettuce corals drastically weakened the resilience of the coral assemblages on the reef slopes. In other words, if neither white-band disease nor bleaching had occurred, staghorn coral might have continued its millennial-scale dominance of the areas not destroyed by the quake.” [6] The reef is expected to return, but it is impossible to determine the species of coral that will become dominant and the new ecosystem that will develop there. The recovery will likely take centuries to millennia instead of decades. Corals, similar to everything on this planet have the capacity to adapt. Their adaptation becomes more difficult after a powerful storm hits an area that already has damage, like in this study. [4]

The earthquake and subsequent tsunami of 2004 severely impacted coral reefs in the Indian Ocean, especially coral reefs lying along the Nicobar Islands. Damage was recorded at 14 different sites along the islands following the earthquake and tsunami. Acropora coral and Porites coral significantly declined around the area. Acropora coral can reproduce quickly, but it is prone to destruction from any type of disturbance while Porites coral is the opposite--it takes a long time to grow but can combat disturbances more easily. Since both types of coral were eradicated, scientists have determined that the earthquake and tsunami were so severe that they overcame both types of coral resistance. After the catastrophes, algal cover increased in the areas that experienced the highest coral mortality. Researchers cannot currently predict the future of this reef because the algal bloom could possibly indicate a shift from a coral dominated community to a permanent algal dominated community, but there have also been more individual coral pieces, leading to a possibility of coral reef recovery. [7][2] 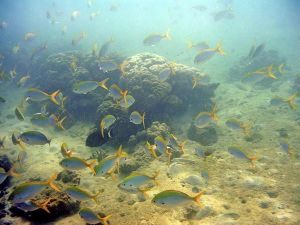 1. Restoration of Previously Damaged Reefs: The ecological history of a coral reef plays a significant role in the future conditions of the reef. As described in the Belizean Barrier Reef Case Study, the condition of the coral determines the impact the catastrophe has on it. If there has been much damage to a coral reef in the past, from either other natural events or human events, then it is more easily destroyed by earthquakes and more difficult to rebuild post-catastrophe [6]. Additionally, many scientists suggest that conservationists need to consider natural disasters when deciding conservation areas. If a reef has been in a conservation area and thus has not experienced as much prior trauma as a reef not in a conservation area, then it will not be destroyed as badly by the natural disaster and will recover more quickly.[2]

2. Status of Future Caribbean Coral Reefs: The return time of a coral reef after a catastrophe has occurred ranges from 2,000 to 4,000 years, meaning the reef is in the same condition it was prior to the natural disaster. Hermaphroditic corals, those that self-fertilize, tend to rebuild faster because they do not require an additional reproductive counterpart to grow their population.[6]

In order to gain a better understanding of the damages due to earthquakes and tsunamis, it would behove scientists to do research of the damage before the storm, as well as after. Each storm is different. Each coral reef is different. This means that in order to see the damages that come directly from the storm, the corals need to be explored before and after a specific storm. The only way to prevent further problems at the sites of storms is to limit the damage before the storm hits. Further research can be done by exploring more storms that have caused damage to storms and analyzing the differences from before and after the storm. By doing this, scientists can make a better analysis on the true damage from the storms.