As Merriam-Webster dictionary defines it, a feeding guild is “a group of organisms that use the same ecological resource in a similar way."[1] In simpler terms, feeding guilds can be described as groups of living things that get their energy necessary to survive from the same source. Feeding guilds do not have to be made up of the same or similar species; they can be completely unrelated, only alike in the fact that they acquire resources from their surroundings in similar ways. Because members of a guild use the same resources, competition is common within that guild.[2] A feeding guild is composed of three major categories: autotrophs, heterotrophs, and detritivores.

Autotrophs are "self-nourishing organisms capable of absorbing solar energy and photosynthetically building high-energy organic substances." [3] Because these organisms need light to survive, they are most commonly found within the top 70 meters of water in marine environments. Since most coral reefs reside in shallower waters, they provide a great environment for autotrophs. Two examples of autotrophs in coral reef ecosystems are seaweed and zooxanthellae, a type of algae that makes up part of the coral and gives it color.[4]

Heterotrophs are consumers, they obtain their energy necessary to survive from other organisms. Heterotrophs can be broken down into seven different subcategories: herbivores, carnivores, omnivores, filter feeders, planktivores, oppurtunistic feeders, and parasites.

Herbivores feed only upon autotrophs. There is a large guild of herbivores in coral reef environments.[4] Two examples are the Green Sea Turtle, which eats sea grass, and a sea urchin, which eats algae.

Omnivores consume both autotrophs and other heterotrophs.An example of an omnivore in coral reefs are angelfish which feed algae, smaller fish, and shrimp. 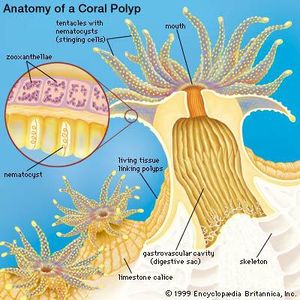 The anatomy of a coral polyp[5] 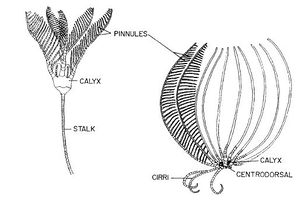 Planktivores eat the small organisms (collectively known as plankton) that drift in the water. They are herbivorous and consume primarily phytoplankton, or they can be zooplanktivores that consume suspended animals. [7] The whale shark, which feeds primarily on plankton, is an example of planktonivores in coral reef ecosystems.

Filter/suspension feeding are the primary methods of consuming this organic material (pseudo-plankton) that floats in the water column.[7] Suspension feeders actively capture particles of food from the water using tentacles while filter feeders use a filtration system to filter out dissolved particles after pumping in water. Zooplankton and sponges are good examples of these in coral reef environments.[8]

One of the most well-known examples of filter feeders are corals. Corals use suspension feeding to supplement the nutrients they already derive from their symbiotic relationship with Zooxanthellae, and they tend to use it only during the night[9].When suspension feeding, the coral polyp extends its tentacles out from its body where they can encounter small fish, zooplankton, bacterioplankton, and other such plankton. The surface of each tentacle has thousands of stinging cells known as nematocysts, which are fired when prey swims or floats by. The stinging action of the nematocysts stuns or kills the prey and then the polyp tentacles pass the prey item back into the mouth of the polyp[9]. Some species of coral are mucus suspension feeders, which means that they use mucus films or strands to collect fine particles from the water column rather than nematocysts. Cilia are then used to draw the trapped particles into the polyp’s mouth[9][10].

Crinoids are another example of an organism that uses suspension feeding. Crinoids have finger-like podia that occur in triads on both sides of the pinnular ambulacra. When a suspended food particle touches the podia, it flicks, bends, or curls rapidly inward to force the food particle into its food groove. The primary podia are adhesive, but the role of mucus in capturing food particles varies among species. [11].

Sponges (Porifera) are prime examples of filter feeders. Sponges filter feed by drawing water in through incurrent pores. They draw this water in by creating a current with special collar cells that have whip-like flagella.[10]. As water passes through the channels and chambers inside of the sponge, particles are filtered out and taken up by the sponge as food[13]. The filtered water is then pumped out through a large opening at the top of the sponge called the osculum[10]. Sponges are unique among filter feeders in that they are the only filter-feeding metazoan group capable of capturing and consuming picoplankton as small as 0.1 micrometers. They are able to do this thanks to a very fine internal mesh network used to collect the tiny particles from the water [14].

Bryozoans also are filter feeders. They feed on plankton using a ring of tentacles called the Iophophore. The tentacles on this ring are ciliated and are retracted through contractile muscles that are activated by nerve impulses [10].

Brachiopods are very similar to Bryozoans in that they also have a ciliated Iophophore used for filter feeding. The unique feature of Brachiopods is that they have two coiled tentacles within their shell that form the Iophophore [10].

Polychaete worms belonging to the family Serpulidae and to family Sabellidae are filter feeders. Well-known examples include Featherduster Worms and Christmas Tree Worms, which are both members of the Serpulidae family. They extend tentacles out to feed and then use cilia to sweep water towards the mouth and to filter out food particles.[10]

One final example of filter feeders are the tunicates. Tunicates draw in hundreds of liters of water a day through an incurrent siphon. This water passes through a pharynx where small food particles are filtered out before the water is expelled via the excurrent siphon. These small food particles are trapped in a continually moving layer of mucus produced by specialized cells. Cilia are responsible for both creating a current of water flow within the tunicate and for moving mucus and food along to the digestive system[16].

This group targets prey based on what is available at the time. Scavengers and cannibals, such as some species of crabs, are included in this group. [7]

Parasites "live on or in another organism", taking their nutrition from the host organism while giving nothing in return. [7] A common example seen on coral reef fish is the cymothoid isopod which can deplete energy and even leave bone deformations to the affected fish's facial area.[17] 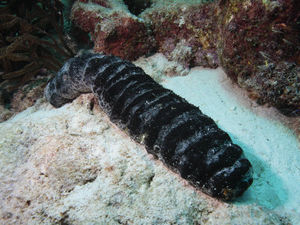 Detritovores are decomposers that feed upon the waste products and dead remains of other organisms. [3] They are extremely important to coral reef ecosystems because the break down the dead waste, convert it to energy they can use, and then return important materials back into the environment. For coral reefs, the main decomposers are bacteria. Bacteria play an essential role in the nitrogen cycle to provide the environment with necessary nutrients, such as nitrate, while also keeping toxic waste levels low.[4]

Bacteria are not the only detritivores on the reef, however. For example, sea cucumbers constantly funnel sand and mud into mouth to extract organic material. By doing this, they effectively clean reef of any dead organic matter and any bacteria that may be living on it. In fact, it is estimated that detritus-eating sea cucumbers on typical coral reef will cycle all the surface sediment surrounding that reef through their digestive tracts at least twice a year[10]. 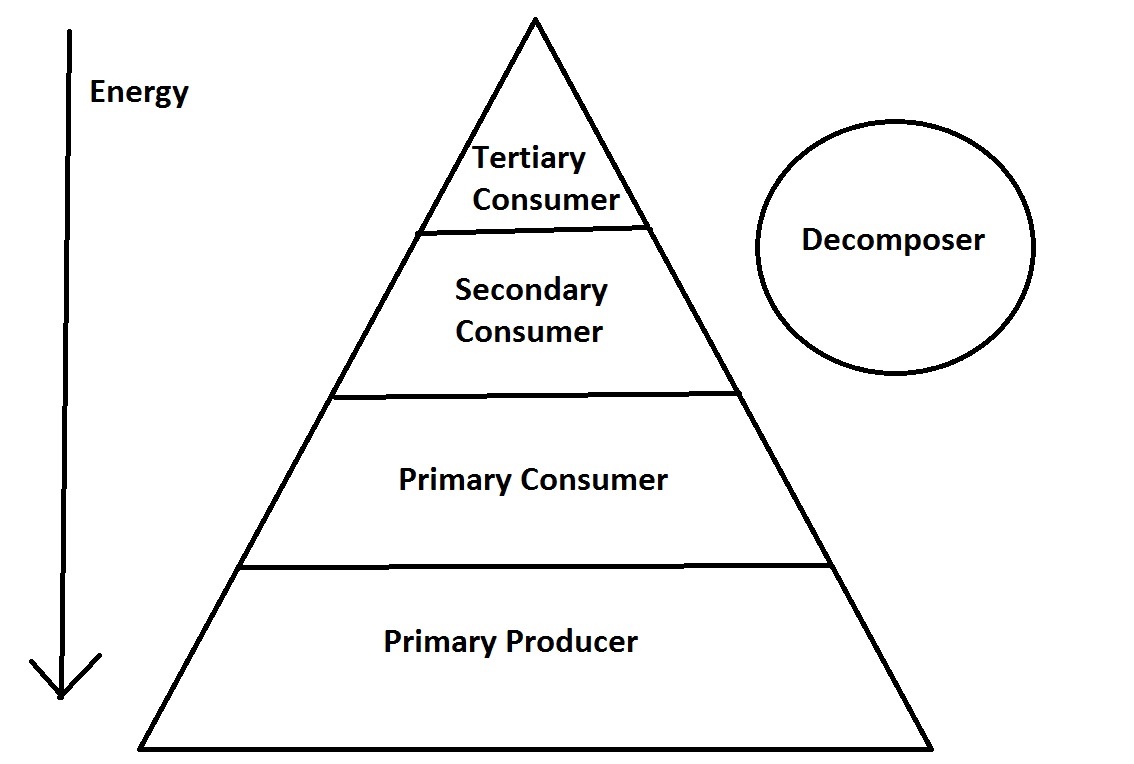 The trophic levels form this pyramid shape to represent the energy (biomass) lost through each trophic level. This is a highly simplified model. There could be a greater number of trophic levels or overlap between levels. A more complex and realistic model would be an interconnected food web. [19]

Tertiary consumers are the top of the food chain and do not have an predators. They feed on secondary consumers. Heterotrophic organisms that fall into the tertiary consumer tropic level are higher level carnivores.[19]

Decomposers feed on dead organic material from any trophic level in the food chain. For this reason, decomposer do not hold a position in the energy pyramid, and are instead located on the side of the pyramid. Detritivores and scavengers are decomposers.[19]

Why It's Important: Imbalances in the System

“Coral reefs are complex ecosystems that require a balanced trophic structure to function properly and efficiently. Imbalances can occur in this intricate trophic cascade from the top down or the bottom up.”[4]

An example of bottom up effect imbalances that illustrates why feeding guilds and trophic levels are important to the coral reef ecosystem comes from an incident in the Great Barrier Reefs. Coral in the Great Barrier Reefs is now being threatened not only by coral bleaching but an even bigger predator, the Crown of thorns starfish. Agricultural runoff containing fertilizer has caused an excess of phytoplankton to be present in the waters around the reefs. The Crown of thorn starfish larvae feed on this phytoplankton and thus caused a population explosion in the area. The problem is that the crown of thorn starfish feeds on coral and can eat up to 10 square meters of tissue a year. This bottom up effect has taken its toll on the reefs surrounding Australia, with 42% of coral reef decline in the area due to the crown of thorns invasion. [20]