Fringing reefs or shore reefs grow along the shoreline in warm, shallow water. In comparison to barrier reefs and atolls, fringing reefs are relatively young. They may be directly attached to the coast or submerged in the warm, shallow water parallel to the coast. However, any further separation creating a lagoon means the reef is no longer classified as fringing, and has become a barrier reef.[1] Fringing reefs need abundant sunlight and a suitable hard bottom. It is also important that the water has low nutrient levels and low turbidity. Runoff or excessive sediments (like after a storm) may inhibit growth.[2]

According to Darwin's Theory, fringing reefs form around volcanic islands. The generally shallow and gently sloping coastline is perfect for rapid calcium carbonate growth. As time progresses and the island submerges, a lagoon is formed between the land mass and the coral platform. This is then known as a Barrier.[1]

A fringing reef can be broken into three main areas: the reef flat, the reef front, and the outer reef slope. These areas develop distinct characteristics and marine life depending on the erosional forces, water temperature, and depth of the region.[1]

Reef Front is the shallow, shore-facing side of the fringing reef. Vulnerable to wave action, the reef front is made up of primarily sediment, rubble, and sand. The water in between the fringing reef and the shore is very shallow and fluctuates in temperature. Because of this, there is typically very little coral growth.[1]

Reef Flat is the shallowest, flattest part of the reef. At low tides, the reef flat may emerge from the water. Because of the changing depths and erosion, coral does not grow on the flat.[1]

Outer Reef Slope is the seaward facing side of the fringing reef. It slopes steeply towards the ocean floor into cooler, clearer water. This side of the reef is normally home to a very diverse ecosystem of corals, algae, fish, and creatures.[1]

Where are they found?

Since fringing reefs often form around the perimeters of newly developing islands, they are common across the subtropical region, having large expanses off the Western coast of Australia, the Carribbean, the Red Sea, and the Indo-Pacific.[2] The map below shows the location of corals classified by reef type. The red dots represent fringing reefs. 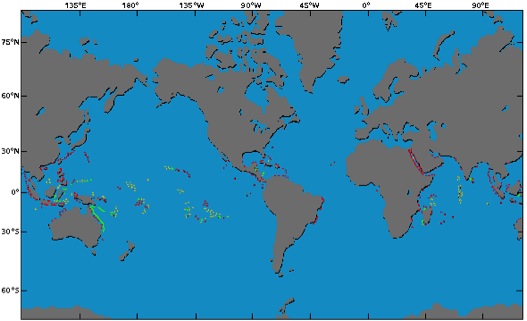 The Ningaloo Reef is largest fringing reef in the world, stretching 260 km along the western coast of Australia. It is a very popular destination for snorkelers and scuba divers because of its proximity to the shore. Unlike the Great Barrier Reef which must be accessed by boat (remember, fringing reefs are close to shore and barrier reefs are separated by a lagoon), it is possible to swim out to the Ningaloo reef.[3] 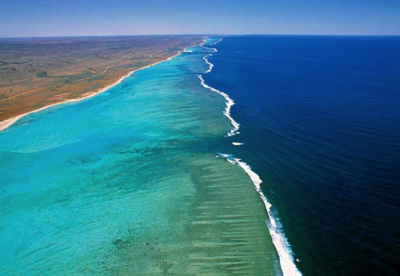