Microplastics in Our Reef Ecosystems

There is a plastic paradox that scientists have studied for decades. Billions of tons of plastic are being dumped into the ocean each year, yet water quality reports lower concentrations coming out than what is going in [1]. Recent studies believe coral reefs to be sinks storing a large portion of this litter- microplastics [2].

Microplastics are plastic filaments less than 5mm in size. They are the result of decaying plastic in the ocean through photodegradation. The small size of these plastics makes them commonly mistaken for food for marine organisms, though they may also bind to coral structures through surface adhesion. This integration of microplastics into marine life causes circular adverse effects in the food chain, threatening the growth and health of marine organisms. However, continued research is working to reduce microplastic concentrations in the ocean to protect 25 percent of the world’s biodiversity inhabiting coral reefs [3]. 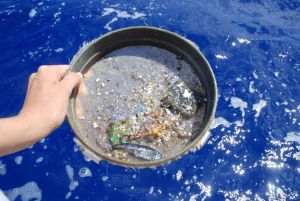 Plastic waste is reportedly entering the ocean at a rate of 11 million metric tons per year and could expand to about 30 metric tons over the next 20 years. Ocean-wide research sheds light on how these microplastics are formed and distributed throughout our marine habitats. The impacts of microplastic distribution specifically on our reef ecosystems are still being explored through research unique to its own environment. Many possible solutions to plastics' effects on reefs are being tested and heard about through experimental research papers in relation to the removal of the microplastics and rehabilitation of reefs with new strategies and technologies.

Microplastics can be classified as one of two different types: primary and secondary. The primary microplastic description includes extremely small synthetic polymers derived by scientists and engineers. These polymers come from activities like sandblasting, the fabrication of synthetic clothes, and product maintenance. This classification also includes microbeads typically found in cosmetic products. Secondary microplastics are different forms of fragmented pieces of macro-plastics originating from environmental processes like photodegradation, hydrolysis, biodegradation, and thermo-oxidative degradation.

Manufacturing processes as a main source of microplastics [5]

Plastic pollutants find their way into our oceans through several anthropogenic activities stemming from how they were formed. Domestic runoff powered by water flow from households, public facilities, and businesses is one of the simplest modes of transportation for these polymers that most of us are closest connected to. When cosmetics and other hygiene products which throughout their production have acquired microplastics, are rinsed off they enter our water system flowing out to the oceans or cycling through other product production and human consumption. Runoff carries microbeads and many fragments of large plastic trash from items properly or improperly disposed of.

Industrial plastic manufacturing fragmentation is a second large source introducing plastic in the form of pellets and resin powders from air blasting. Not only is there product waste due to inefficient manufacturing systems, but there is also waste in the form of simple degradation of material throughout the fabrication of the product. 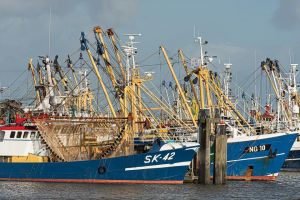 Coastal fishing practices and aqua tourism source our marine microplastics from gear and single-use packaging for transporting goods and tools on boating trips which accumulate littered and forgotten. Across runoff, manufacturing, and marine activities the plastics collected are in varied shapes and sizes and stages of becoming microplastic if not already one. Due to the varying state, they settle in different areas throughout our oceans from juvenile habitats to reefs, open ocean, and deep-sea sectors.

Effects of Microplastic in Marine Ecosystems

Once entering the ocean, microplastics integrate themselves into coral reef communities through many methods. Each method is influenced by species-specific behavior, build, and the properties of the plastic. No matter the mode, microplastics impose threats for marine life health, development, and fitness. 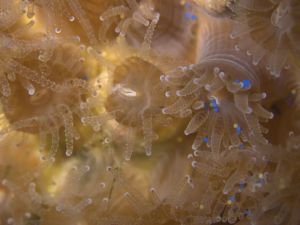 The most direct form of microplastic integration is through active ingestion. As microplastics live in the ocean, they accumulate a biofilm layer that causes coral to mistake it for food (see figure 2 below). Coral with large polyps intake the microplastics. Fish similarly mistake the plastic bits as small organisms. Once ingested, the plastic reduces appetite of coral and fish which slowly lowers energy levels of the organisms which is needed to fight off disease [8].

While ingestion causes blockades in the digestive tracks of marine organisms, microplastics have also been found embedded in the skeletal matrix of coral. It is hypothesized this may be due to polyp growth over particles adhered to the exterior of the animal. Alternatively, the plastic may pass through the endoderm and calicoblastic layers of the animal and cemented into the skeleton as aragonite is laid down for growth. This rigorous integration causes concern for coral growth and tissue for housing zooxanthellae algae as an energy source [9].

The final most common mode of ingestion of microplastics is through passive surface adhesion. As plastic binds to the exterior of coral and other marine organisms, the organisms must overexert energy to remove these plastic bits. Additionally, for coral's zooxanthellae and other algae and plants, sunlight can be blocked, reducing photosynthetic performance and jeopardizing the energy capacity of organisms needed for survival [8]. 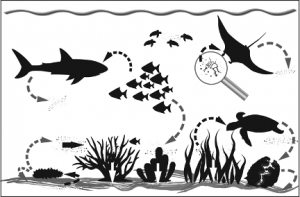 The circular nature of microplastic integration into marine communities [9]

It is important to note that microplastics do not just threaten their hosts, but so too threaten all organisms in the food web of the region. As fish eat plants or other fish containing microplastic, they also succumb to its health impacts, causing a vicious cycle of disease and reduced growth in a community [9]. Humans are no exception, as consuming fish with microplastic contents add to the five grams of plastic they consume each day- amounting to a credit card of plastic each week [10].

Getting a handle on microplastic output

It is difficult to control microplastic output in reefs when microplastics detected could have been deposited anywhere in the world. However, it is possible to decrease local output. Local plastic output creates a more concentrated microplastic presence in nearby reefs and eliminating this threat would significantly decrease not only the amount of microplastics in the reef, but the rate at which they are increasing.

Litter in St. Thomas next to a sign trying to oppose littering and dumping. Photo by Rachel Geyer

An emphasis is placed on littering and plastic use in most coastal places, particularly those with surrounding reefs. In the US Virgin Islands for example, the fine for littering is shown as $1000, much higher than the $250 fines start at in North Carolina. Fines incentivize people not to littler to an extent, but because it is so difficult to be punished for it coastal towns continue to create awareness on their own with signs and murals to save the surrounding environment. That is still leaving the governments up to whether the residents care enough to listen to this message, and it is often not followed. St. Thomas, USVI has multiple signs up on the island asking residents to please refrain from littering. However, nearly all of these signs are surrounded by litter and there is no way of tracking where it came from. It seems to be taking an escalation of this issue for it to become talked about and for more action to be taken. People are working hard to spread awareness of the effects that their litter and plastic use has on the area, and for the time being it should be making a small dent in the level of microplastics in the surrounding waters.

The waste that is generated and collected however still stands to be an issue. Dumpsters on small islands are easily overflowed and that excess is simply washed out into the waters. Plastic that would have otherwise been processed is now entering the local waterways. This extra influx of plastic waste could be avoided by developing better waste management facilities and policies.

The best way to reduce the threats of microplastics on reef ecosystems is to reduce the microplastic concentration of the water. Microplastic removal proves difficult because of the size of the particles, but several methods are being experimented with.

Many scientists are researching biological processes to solve this problem. An assortment of animals have been studied on their ability to intake microplastics and store them, among them are types of corals and mussels. Studies have shown that certain species are able to retain microplastics in their system with little harm to them, and remove the microplastic buildup from their systems themselves or by scientists in a lab. This method utilizes these corals and mussels to overcome the difficulty of extracting such tiny particles by "harvesting" it into deposits big enough to extract [2][11].

A more experimental form of extraction has been to use oil and magnets. Microplastics in the water are drawn to types of oil (currently the most successful is a ferrofluid, vegetable oil with iron oxide) and then from there the plastic ridden oil can be drawn out with magnets. This has shown effectiveness on a small scale in testing and currently is beginning to work its way into being implemented in marine environments [12].

In cases where the microplastics can't be gathered into larger deposits, methods comparable to sewage treatment have proven effective. Sewage treatment processes are already designed to extract small particles from the water passing through it, so these processes have been altered to work with particles as small as microplastics [13]. The foundation that was already there for this process to be developed has made it one of the more prominent methods of microplastic collection.

To continue rehabilitating the reef ecosystem, species most strongly affected by microplastics may need additional help stabilizing their numbers. At this point, it is not feasible to expect much progress from these efforts until the threat of microplastics begins to subside. If scientists were to put all their resources into repopulating a species without reducing the threat it would just be subjecting the new population to the same long term threat. While it can definitely be beneficial to help populations while microplastics concentrations are remaining the same so as to counteract the negative aspects, until the microplastic concentration is reducing at a significant rate, continuous progress won't be possible.

The exponential increase in plastic production over the last few decades has resulted in a threat we did not predict: microplastics. While they have been found both on land and in water, water seems to be the most concentrated build up of them, and reef ecosystems in particular are showing the effects of this threat. Most corals have difficulty maintaining themselves with microplastics built up in their system that can interfere with their growth and symbiotic relationship with zooxanthellae. In addition to corals, all reef creatures ingest microplastics and the concentrations in their systems simply increase up the food chain. These problems can be addressed by decreasing the concentration of microplastics in reef environments, which starts with decreasing the input of plastics into the environment. The microplastics that are already present have been much more difficult to remove, but the new methods of extraction being developed show promise at decreasing microplastic concentrations.

Addressing this threat to the reef ecosystem is important because while it is just one of many threats it is currently facing, alleviating any of them will create a less stressful environment for this ecosystem. Reefs are interlaced into natural and human processes and if they continue to be this threatened, all of the processes they interact with will be threatened as well.