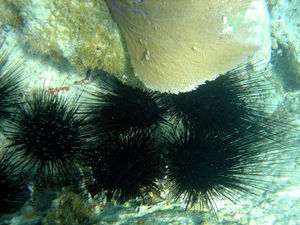 In February of 2022, the Virgin Islands Department of Planning and Natural Resources reported that "the territory is experiencing an unusual die-off event of Long Spined Sea Urchins", based on reports from local dive shops. [4] As word spread, reports started coming in from other islands in the Caribbean. By April 2022, concern was growing about the unusual die off, and scientists expanded the die-off event to include other species of urchins, including the rock-boring urchin and the West indian sea egg. [5] 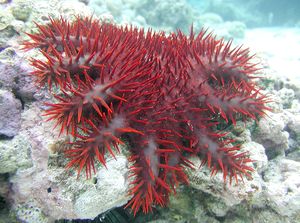 COTS outbreaks first erupted in the 1950s, and have even had a significant impact on the Great Barrier Reef. From the 1960s to the 1980s, COTS outbreaks plagued regions ranging from the Red Sea to the Indian Pacific Ocean and French Polynesia. Over-collecting and over-fishing of the predators of COTS, as well as a decline in predator populations due to habitat destruction (mostly by human interference), are considered major contributors to COTS outbreaks.[6] In order to manage outbreaks, a variety of interventions have been implemented. Manual removals, while labor-intensive, have proven successful. Starfish injections are another control measure that has been used to effectively reduce COTS populations. Introduction of predator species such as certain types of fish (some pufferfish, triggerfish, and the humphead wrasse), Triton’s trumpet (a large gastropod mollusk), and other creatures may also help mitigate COTS outbreaks. However, concerns have arisen about how the introduction of these predators could affect the ecosystem as a whole.[7] Other measures to alleviate outbreaks include regulating and restricting industrial and agricultural development along the reef in order to reduce run-off pollution promoting phytoplankton as a source of food for COTS. Many advocates promote investing in programs such as Project Catalyst in an effort to further responsible and sustainable agricultural practices. [8]