What are Sea Surface Temperatures (SST) and how are they measured? 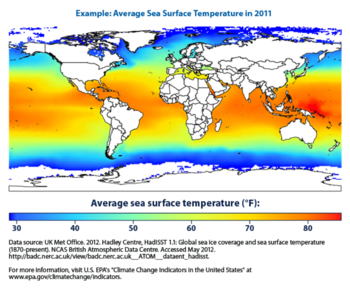 Sea surface temperature is a measure of the energy created by the motion of water molecules on the top layer of the ocean, or the near-surface layer. SSTs vary primarily with latitude but other factors can also affect it. Temperatures are measured between 10 micrometers below the surface with infrared bands and 1 millimeter below the surface with microwave bands using a radiometer.[2] Before the 1980s, SST was measured with instruments on shorelines, ships, and buoys, however this was not the most precise or accurate way of measuring. Currently, the bulk of SSTs are measured by remote sensing from satellites, which measure electromagnetic radiation produced by the motion of charged particles. The motion of the charged particle produces electromagnetic radiation and the amplitude of the infrared and microwave wavelengths vary with temperature, which is sensed by the satellites and recorded. Even with these new ways of measuring SST, there are still some floating instruments in the ocean that measure temperature, too. [2]

Why and how are sea surface temperatures rising? 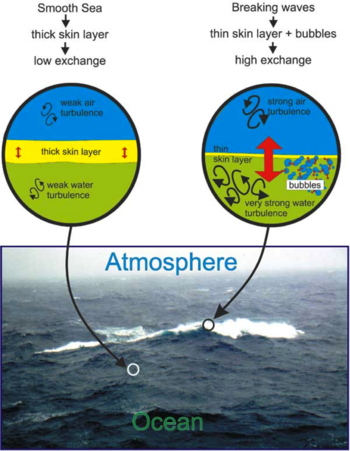 Feedback Loops
The relationship between ocean-atmosphere heat exchanges and global weather and climate patterns can be explained by feedback loops.

What impact does this have on Coral Reefs?

Increased sea surface temperatures leads to coral bleaching, which is a stress response that causes the coral to expel their zooxanthellae or lose algal pigmentation. Corals are very sensitive to temperature changes, confirmed by the research indicating that bleaching can be triggered when the thermal condition is as little as 1 Celsius higher than the mean summer maximum. [6] There is, according to a different study, evidence emerging of possible thermal thresholds in the range of 30-32 Celsius for some physiological processes of coral reef organisms. [7] If the coral is stressed by temperatures outside of this range, certain physiological processes suffer decreased function. In research conducted from June to October 2005, satellite-based sea surface temperature observations from the U.S. National Oceanic and Atmospheric Administration (NOAA) detected a large region of warming ocean temperatures that reached a maximum anomaly of +1.2°C vs. the long-term mean when averaged across all Caribbean reef sites. In several locations in the oceanic regions with increased temperatures, coral mortality exceeded 50%. Along with coral bleaching due to increased sea surface temperatures, decreased processes of coral physiology resulted in a loss of resistance to pathogenic disease and an increased abundance of microbial pathogens [8] This research confirms that increasing sea surface temperatures have a damaging impact on corals beyond bleaching including disease.

For another impact of increasing sea surface temperatures on coral reefs, please visit The Potential Link Between Sea Surface Temperatures and Flooding 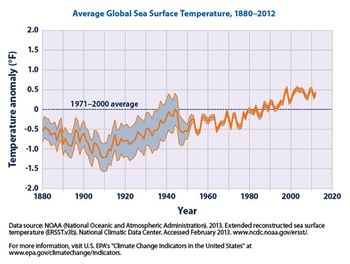 What are some predictions in the scientific community in response to current trends?

Two scientific studies were analyzed to yield both positive and negative data regarding coral reef adaptation in response to increasing sea surface temperatures.

The first scientific study was measuring poleward expansion potential of the coral reef in response to rising sea surface temperatures. The study found that the speed of coral range expansion could reach up to 14 km/year if the reefs were expanding in a region of poleward current flows. Typically coral reefs expand at a rate of 5km/year. While the study yields promising results for future coral expansion into marine environments with a more suitable temperature range, this expansion is only possible given the condition of poleward currents pushing the coral's expansion. [10]

What are some things we can do to slow down rising Sea Surface Temperatures and their effects?

There are many factors that contribute to the rise in sea surface temperatures (SST). The two main factors are human activities such as pollution, and natural heat exchange. This has become a large problem for many reasons. SSTs play an important role in the ocean's heat content and they also regulate the climate and control weather changes. For example, higher ocean temperatures have been shown to lead to more severe storms. This is because warmer surface water dissipates more readily into vapor, making it easier for small ocean storms to escalate into larger, more powerful storms. Records show that their has been an increase in strength and prevalence of tropical storms such as hurricanes and cyclones. [12]

According to the European Environmental Agency (EEA), in 2015 the sea surface temperatures were approximately one degree Celsius higher than 140 years ago. [13] These temperature increases are expected to persist, as well. Due to these changes, during the 20th century, sea levels rose 15-20cm (1.5-2.0 mm/year). In the past decade, studies have indicated that sea levels have jumped to 3.1 mm/year. According to John Church and James Hansen, 21st century sea levels rise estimates range from 1-2 meters. [14] While this may not seem major, studies show that a sea level increase of even half a meter can cause severe damage to Small Island Developing States (SIDS)who are most affected by sea surface temperature changes, tropical storms, and sea level rises. [15] Many Pacific countries have already reported regular floods from ocean water. Concern for future flooding continues to be expressed.

Thermal expansion has also been a large problem. This occurs when the water temperature increases and water surface area expands due to the high activity of water particles. Scientists have estimated that thermal expansion alone has contributed to 2.5 cm of sea level rise in the last half of the 20th century.[14] These findings demonstrate that warmer sea surface temperatures lead to an increase in flooding through the rise in sea levels, the increase in strong storms, and thermal expansion. The primary cause for all of these changes is human pollution.