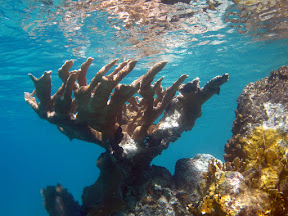 Stony Corals are also known as Hard Corals. They are considered the reef builders of the ecosystem because of the calcium carbonate skeleton they secrete, which distinguishes them from soft corals. We will discuss the classification, evolutionary history, skeleton and colony formation, behavior and environment of stony corals, and then discuss some particular examples common to St. John and the US Virgin Islands.

Stony Corals belong to the animal kingdom, which include eukaryotic multicellular organisms that i) form from blastula embryos ii) are loosely mobile and iii) gain nutrients through ingesting food.[1]

Members of the phylum Cnidaria share common characteristics including i) a body open to the external environment ii) radial or biradial symmetry iii) a diploblast structure and iv) nematocysts. Intrinsic nematocysts are capsules of specialized cells that will uncoil and extend rapidly when stimulated, usually to either sting as a form of defense or to capture food. Other organisms other than stony corals that are classified as Cnidaria include jellyfish, sea anenomes, portuguese man of war, hydroids and freshwater hydra. [2] This means that, despite popular belief, stony corals are more closely related to jellyfish than sponges.

The class anthozoa is classified by i) having no medusoid phase in the life cycle and ii) living in the form of polyps because their skeletons function for protection and not movement, and iii) existing solely in marine environments. [3]

The subclass hexacorallia to which sea anenomes, black corals and stony corals belong is characterized by tubular polyps that have tentacles in multiples of six. [4]

Scleractinia are comprised of stony corals. This order is distinct because of their hard skeleton attached to a firm substrate. [5]

Representation of the Distribution of the families of Scleractinians throughout the Evolutionary history. [5]

Because of their hard calcium carbonate skeleton, stony corals have a rich fossil record. They first appeared in the Mid-Triassic period, after replacing their softer bodied relatives, skeletonized rugose and tabulate corals, which went extinct in the Permian Extinction. Coral biodiversity peaked in the Late Jurassic Period, when more than 200 genera were in existence. In the Early Cretaceous Period, rudist bivalves began forcing out hard corals, but this effect was minimized by rudist bivalve extinction in the Late Cretaceous Period, which enabled coral growth worldwide. Hard corals have remained dominant in reefs since the Eocene Period, although mainly in tropical regions.[6][5]

A coral can exist as either a solitary polyp or as a colony of thousands of polyps that are connected by a continuous horizontal tissue called the coensarc. The coensarc connecting colonial corals is an extension of the polyp's body walls that creates a common gastrovascular system allowing the polyps to share food, water and wastes; meaning successful feeding by an individual polyp benefits the colony as a whole. Coral polyps generally range in diameter from 1-3 mm for colonial corals or up to 25 cm in some solitary corals.[7] Stony, or scleractinian, corals are often called "reef building corals". The lower half of the stony polyps body and basal disk secret a calcium carbonate (limestone) skeleton. Living polyps continue to deposit calcium carbonate beneath themselves and the skeleton grows into the massive coral "rock" that you see in museums or gift shops. This large skeleton houses and protects the polyps and provides a solid substrate to support the coral colony. Thus stony corals are integral to ocean communities because they build the structural support for the diverse reef community.

The entire coral skeleton is called the corallum and it is made up of individual coral units called corallites. The calcium carbonate (CaCO3) skeleton is secreted by ectodermal calcioblasts in the lower portion of the polyp.[5]

side-view of a corallite[7]

After landing on the substrate, the polyp begins by secreting a thin skeletal basal plate, from which septa (vertical plate-like partitions) radiate outwards; this is followed by formation of the theca (the skeletal wall). The inner-septa often fuse to form a columella (central axis of the corallite found beneath the polyp mouth). The polyp now sits in a cup-like depression called the calyx (defined by the theca and the basal plate). Additional structures include the coenosteum (the skeletal structure beneath the coensarc) and the calice (the outermost surface of the corallite). From the above description you can see that most of the polyp is composed of calcareous (composed of calcite, or calcium carbonate) skeleton.[5]

Periodically a polyp may lift off its base to secrete a new basal plate above the old one, leading to the creation of a new chamber within the skeleton. Living coral deposits CaCO3 in this manner, adding partitions and elevating the corallum. Therefore, only the outermost part of the corallum contains polyps, the rest of the inside is just skeletal material.[8] The coral can also grow horizontally by the budding of new polyps in asexual reproduction.Oral discs around the polyps mouth produce the new polyps and the process additionally lengthens the oral disc and leads to the formation of new mouths in it. For example, a common oral disk containing many mouths is shared by a row of brain coral polyps.[9]

Stony Corals can reproduce sexually and asexually. Sexual reproduction allows for spread of coral to new places and forms a genetically unique coral. It occurs when large numbers of male and female gametes are released into the ocean, which join to form floating larvae called planulae. After floating in the light, surface level of the ocean for 2 days to (in rare cases) 2 months, a small percentage of these planulae settle and grow into corals, which explains why it is necessary to have such extensive amounts of gametes released. Asexual reproduction allows for the growth of corals by creating a coral with the same genetic makeup as the parent cell. This occurs through corallite multiplication by budding and splitting. [10] In Intratentacular budding a polyp will divide into two or more polyps, and in extratentacular budding a new polyp forms on the side of the original polyp.[11]

Like all animals, corals must ingest food in order to obtain their nutrients. Due to their hard, protective skeleton and their attachment to a firm substrate, corals cannot move to obtain their food like most animals do. One way corals obtain nutrients is by using their tentacles to capture phytoplankton, zooplankton, dissolved organic matter, dissolved inorganic matter, particulate organic matter and bacteria floating through the water. The second way in which corals obtain nutrients is through their mutualistic relationship with zooxanthellae, in which zooxanthellae obtain a habitat from coral, while performing photosynthesis to provide some energy for the coral. [12] The products of zooxanthellae photosynthesis supplied to the coral, namely glucose, glycerol, and amino acids, are macromolecule "building blocks" essential to cell growth and function. The coral uses these products to make carbohydrates, proteins and fats, and to produce calcium carbonate. Additionally corals obtain their color from the zooxanthallae.[8] Coral bleaching occurs when the coral is subjected to stressful conditions and expels its zooxanthallae, or when the zooxanthallea lose their pigmentation.

A nematocyst is a capsule of specialized cells that will extend out of their coiled formation in order to sting a threat or capture food. While only cnidaria produce nematocysts, some animals have have ability to store them safely in their bodies to release as a defense mechanism. Corals use nematocysts sparingly, as the production takes large amounts of energy, and each one can only be used once. It has been shown that cnidarians are capable of controlling the release of a nematocyst, based on a stimulation. While there are over 30 morphologically distinct nematocysts, there are three main functional categories of nematocysts. A volvent wraps around its prey to capture it, despite being unarmed. A penetrant captures its prey by using barbs to deliver a toxin. A glutinant uses a sticky substance to attach prey to its tentacles. [2]

Adult colonial corals are sessile, which means they spend their entire lives in one place. Corals generally thrive in the warm clear waters of tropical and subtropical areas such as the Indo-Pacific and Atlantic oceans, and are mostly found between the Tropic of Capricorn and tropic of Cancer (30°S, 30°N latitude) [7]. The geographic distribution of stony corals is restricted by their physiological demands for development which are influenced by abiotic factors such as: temperature, light, sediment, substrate and wave force.

Scleractinians and other coral species are particularly susceptible to the threats of global climate change, which have been exacerbated by anthropogenic means.

Classification of Corals by Shape

The shape of the colony varies and depends on: character and size of polyp, growth rate, and mode of reproduction. Stony coral shapes generally fall under one of the following growth-form categories[11]: 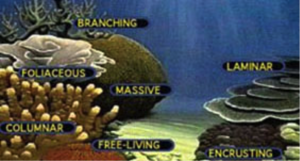 Click on the links to access pictures taken during our ENST 259 trip to St. John to see examples of the following broad categories of stony corals!