Sewage Treatment and the Effect on Corals

Most people think sewage and wastewater are interchangeable. However, there are slight differences in definition that aid in understanding. When talking about ocean pollution it is more appropriate to use the word wastewater, rather than sewage. Wastewater refers to any water where the quality has been affected by anthropogenic influence and consequently is contaminated by various toxins and harmful chemicals [1]. Sewage waste is that portion of wastewater that is specifically contaminated by urine and feces [1]. Sewage often refers to wastewater expelled from a sewer system or pipe from a variety of difference sources [1]. If left untreated, sewage potentially contains many nutrients, solids, pathogens, or heavy metals. When untreated sewage is sent into the ocean, there are many harmful affects on marine life and coral reefs. 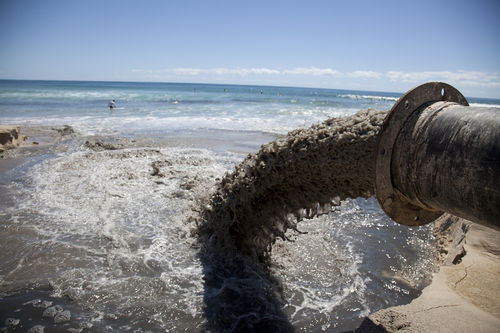 In the United States regulations regarding sewage treatment are strictly enforced and accordingly all of the wastes that we flush down our toilets undergo 3 levels of sewage treatment before being dumped into the ocean. The treated sewage water is pure enough to use a source of drinking water and resultantly, "sewage" in the sense that we think about it does not really pose a threat to coral reefs and the ocean. More commonly, sources of sewage and ocean pollution include fertilization runoff, sediment runoff, leached toxins from storm drains, fuel pollution from marine vessels, and direct ocean dumping from marine vessels, which includes solid, liquid, and sewage wastes. Cruise ships pose an especially huge threat since ocean dumping is not regulated if you are more than 3 nautical miles offshore. The U.S. Environmental Protection Agency reported that a cruise ship produces 74,000 gallons of sewage in a single day and that the cruise ship industry collectively dumps more than 1 billion gallons of sewage into the ocean each year. [3]

Effect of the Nutrients Inputted

Wastewater contains high concentrations of inorganic nutrients, such as ammonium, nitrite, nitrate and phosphate [4]. Typically, coral reefs survive best in nutrient poor areas, so any substantial input of nutrients shifts the composition of the water and cause NutrientLoading. When the water contains too many nutrients, algae grow, which ruins the coral's cover, ultimately hurting coral. [4] Studies have shown that there is a positive correlation between the nitrogen levels in the water and amount of coral bleaching. Further experiments have shown that when nitrogen levels return to normal, these sites experience rapid recovery, implying there is causation between nitrogen levels and coral bleaching. [4] Finally, corals can take up hormones, specifically estrogen, present in sewage waste. When corals metabolism estrogen there are negative affects on reproduction, growth rates and morphological features.[4]

85% of wastewater going into the Caribbean is untreated, with the primary component being freshwater. Freshwater is dangerous for corals because it lowers the salinity of the water. [4]. Without the right balance, corals do not survive well. Another problem of sewage entering the waters is increasing the nutrient levels to a point that causes eutrophication. [4] Eutrophication is when the water becomes saturated with oxygen, creating "dead zones" and collapsing the ecosystem. These dead zones contain an increased number of phytoplankton, which blocks sunlight from corals and increases algal growth, ultimately decreasing coral survivability. [4] Also, when sewage or wastewater contains high levels of heavy metals, this affects coral metabolism and influences the activity of natural coral enzymes. Coral mortality is common under high concentrations of heavy metals, as well as bleaching and low fertilization success.[4] Iron (II) in particular increases pathogen virulence to corals and increases the growth of micro algae. Lastly, sewage input has been identified as the source of the pathogen that causes white pox disease in Caribbean corals. It has been discovered that the human strain of the pathogen causes the same disease in corals.[4] Other diseases are also possible from sewage input. 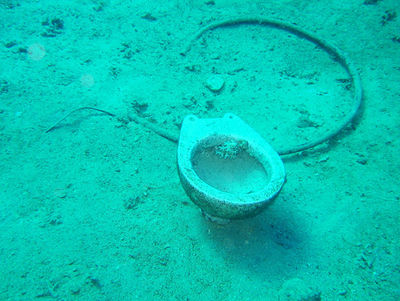 Effects of Solid and Sedimentation from Sewage

One of the most obvious components of sewage is solid and sedimentation. Typically, sewage and untreated wastewater contains a lot of suspended organic solids. The impact these solids have on the corals depends on how long they remain on the surface of the water and how much sunlight they block. [4] When the clarity of coastal waters decreases and turbidity increases, sunlight is blocked from the light-dependent organisms essential to coral survival. [4]Macroalgae grows, which hurts coral growth and possibly kills them. Another issue with sedimentation is when it settles. When sedimentation settles to the ground, this smothers coral reefs and organisms. Corals can survive for a little bit under low sunlight, but if it goes on for too long, photosynthetic activity decreases and growth stops.[4]

Prior to 1972 there were no regulations regarding ocean dumping and pollution. It was believed that the ocean was an effective source for dispersing and mixing wastes such that they were not harmful to the environment. As a result, the ocean was used as a dump site worldwide and estimates suggest that prior to regulation 100 million tons of petroleum products, 2-4 million tons of acid chemical wastes, more than 1 million tons of heavy metals, and more than 100,000 tons of organic chemical wastes were dumped into the ocean each year [6]. In 1972 at the London Convention, 22 Articles and 3 Annexes were drawn up and agreed upon encouraging regional regulations of ocean dumping. Also in 1972 the United States Congress passed the Marine Protection, Research and Sanctuaries Act (MPRSA) which declares that it is the responsibility of the United States to regulate the dumping of all materials which may adversely affect human health, the marine environment, ecological systems, or economic potentialities [7]. Other regulation policies have been adopted worldwide and most regulations are implemented and enforced at the regional level.

Monitoring of Sewage/What's being done

The Environmental Protection Agency (EPA) is the primary agency that oversees the regulations of ocean dumping. To enforce regulations, the EPA establishes the criteria regarding what materials may be disposed of in the ocean and they issue permits for ocean dumping [7]. Such permits are subject to review and violations of the dumping laws and regulations can result in legal consequences and fines. Additionally, the EPA has established designated dump sites for all types of materials. These dump sites are managed and monitored by the USACE and regular oceanographic surveys are conducted at the dump sites. Materials which are strictly prohibited from being dumped into the ocean include: radioactive wastes, chemical and biological warfare agents, synthetic materials which remain in suspension, sewage sludge, medical wastes, industrial wastes, and materials containing high concentrations of organohalogen compounds, mercury, cadmium, oil and known carcinogens [7]. Thus, the majority of materials which are permitted to be dumped included uncontaminated dredged material, which poses no real threat to the environment. However, ships and vessels more than 3 nautical miles offshore are not subject to these regulations and concurrently there is still a high degree of ocean dumping that persists. 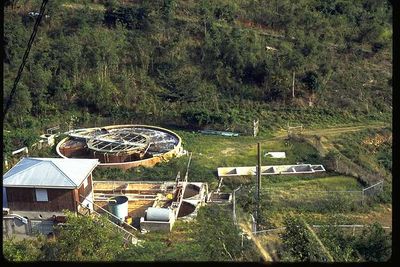 Wastewater disposal has been a problem in the US Virgin Islands. On St. Thomas, there are 8 sewage treatment facilities, 7 secondary plants and an anaerobic pond at the airport. [9] Not all the plants have a secondary treatment, meaning some of the wastewater and sewage is disposed into the ocean partially untreated. Before 2000, only 10% of the sewage being sent to the ocean was fully treated. After 2000, a new secondary treatment plant was opened to serve the 2,000 residents of Cruz Bay. [9] St. Croix is served by one facility and 3 major life stations. One of the main problems the Virgin Islands are facing is that the sewage mains frequently and repeatedly fail. [9] On St. Croix's south shore, there is a 5-mile long benthic “dead zone” due to high toxin levels from sewage. Runoff from unpaved roads on St. John contributes most to the sedimentation in coastal waters. [9] In the town of Frederikested, where much sewage is dumped into the waters untreated, nearly 30% of the corals are infected with black-band and the white plague; Butler Bay, with no sewage, only has 4% infected. The Virgin Islands have tried for over 20 years to improve their sewage systems, but there is still much work to be done.[9]