The Importance of Sound

Sounds play an important part in our daily lives. We use them for communication, entertainment, and they provide all kinds of information about our environment and what is happening around us. Underwater it is no different. All forms of life make sounds and many of them have a way to detect sounds and use the information they contain to make decisions that affect their very survival.

What is SoundScape Ecology?

Sonic profiles or “soundscapes” were first studied in the late 1960s in the context of urban development. Researchers were originally interested in the impact noise had on the perception of people living in cities. It was not until the late 1970’s that soundscapes were used applied to ecological settings.[1] Over the next two decades, landscape ecology contributed heavily to the development of what would later be known as soundscape ecology. In 2009, at a meeting of the US-International Association of Landscape Ecologists, soundscape ecology was presented as a legitimate academic discipline.[2] 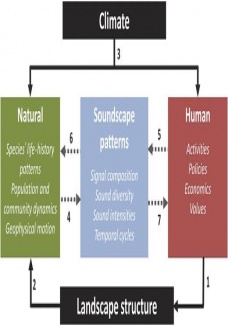 Soundscape ecologists categorize noise into three groups based on the source. Human population also has distinct effects on two of the groups.[1] The first of these is geophony. Sonic energy that comes from non-biological sources such as waves, wind, rivers, storms, tectonic activity, etc., are all examples of geophony. Geophony in an environment often remains constant in occurrence though random in appearance with weather and geological activity being difficult to predict. Human population density does little to change the frequency or magnitude of these noise sources, though our contributions to climate change may be indirectly altering geophony in the case of storms. Biophony is the second category of sound and includes noise produced from non-human biological sources like animals or plants. Mating calls, vocalizations, and other communication fall into this group. Though debated, human voices are sometimes labeled as biophony. The magnitude of these sound sources tends to decrease as human population increases in an area. Deforestation combined with the driving out of animals are the primary reasons for decreased biophony but they can also be masked by rising anthrophony. The final group of anthrophony refers to sound from non-biological human sources such as engines, horns, speakers, and construction. Unsurprisingly, increasing human population leads to increased anthrophony in ecosystems. Environments with extreme anthrophony such as dense urban areas and construction zones can have their biophony and geophony overtaken. 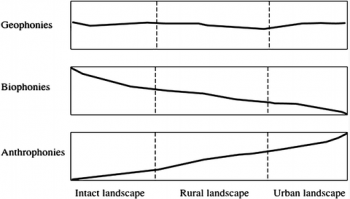 Sonic Changes due to Human Population[2]

What makes soundscape ecology unique is that it incorporates all three sound sources to build an acoustic profile of an environment of interest.[2] Specific organisms are observed in the context of how they fit into their ecosystem rather than looking only at the entire ecological setting as a whole. The most important aspect of soundscape ecology is its goal of conservation. Researchers in soundscape ecology go about their work with the mindset of halting long-term anthropogenic changes to the environment. Soundscape ecologists collect objective data which helps them go about accomplishing the subjective goal of preserving the natural world for future generations.

Coral reefs are incredibly busy ecosystems and this generates noise. There are biophony from fish eating, swimming, and calling to one another. Shrimp make this punctuating popping noise which can be heard all over the reef but remains difficult to locate. Then there is anthrophony from boats passing overhead, sonar, and divers. While most sounds are not so acutely harmful, all ocean sounds have an influence on reef life.

The male bi-color angelfish uses mating calls to attract females, and only fertile females will respond.[3] The “California spiny lobster Panulirus interruptus employ a plectrum (a basal extension of each antenna) over a file (located on the antennular plate below the eyes), which is similar to a stick–slip system as in bowed-stringed instruments” and it is theorized that this is used as a defense mechanism.[4] Additionally, reef sounds are of great importance for the habitat selection of juvenile fish. Juvenile fish from different families can identify the direction and the information contained in different sounds profiles (lagoon sounds compared to fringe reef) and will use the information to decide where to settle. The juvenile damselfish (family Pomacentridae) specifically seeks out fringe reef sounds for settlement.[5] The implications of this will be discussed in the next section. Biophony is a vital component of the reef ecosystem that influences the behavior of different organisms and their ability to survive. 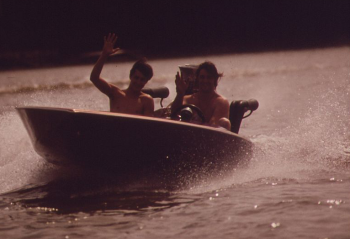 Anthrophony is largely disruptive to the reef ecosystem. The most immediate effect is the masking of biophony. This leads to a decrease in predator response and a decrease in settlement as different organisms can no longer identify auditory cues. Anthrophony can cause behavioral, and physiological changes as well by decreasing feeding, disrupting normal movement, increasing reproductive failure and delaying metamorphosis in crustaceans. The most severe incidences of anthrophony, such as pile driving, create enough force that it can cause fish mortality.[7] 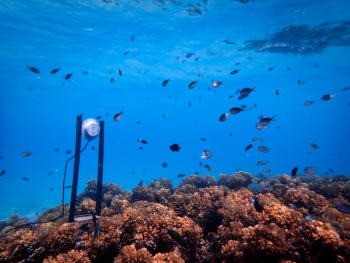 While the use of acoustic enrichment on coral reefs is relatively new and has not been studied extensively, one study by Timothy Gordon of the University of Exeter discovered that acoustic enrichment is quite successful. According to this study, when the sounds of a healthy reef were played on underwater speakers in dead or dying reefs, nearly twice as many fish congregated in those areas than when no sounds were played.[9] This is promising because it could provide a method to attract fish to artificial reefs and encourage fish to remain around dying reefs.

Interestingly, many of the fish that came when sounds were played were juvenile fish looking to set up territories. This is important because it means that acoustic enrichment could be used to set up fish communities that could be fairly long-lasting, if the fish remain in the areas after the speakers were removed. While there are currently no follow-up studies on if the fish remained in the area after the speakers were removed, this is still an important discovery.[9] If areas of dead reefs were repopulated and remained so, then the local fish community would be able to function. Besides helping the local fish community, this technique could help increase the health of the corals and prolong their lives as it would increase the health of their ecosystem.