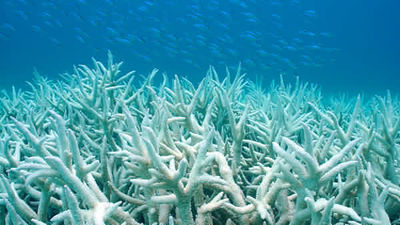 There are a number of chemicals found in organic filter sunscreens that have damaging effects on coral reefs, including oxybenzone, butylparaben, ethylhexylmethoxycinnamate, benzophenone-3, and 4-methylbenzylidene. [1] Benzophenone is a mutagen, carcinogen, and endocrine disruptor, and though it's banned in food and food products, it has been shown to accumulate over time from the degradation of sunscreen products containing octocrylene. [4] [5] All of these chemicals promote coral bleaching, but the chemical that has been studied the most is oxybenzone. Oxybenzone, a common ingredient in sunscreen that is meant to protect the skin from UV radiation, has been found to have harmful effects on coral reefs. This ingredient leaches the coral of its nutrients, exacerbating the coral bleaching process. [6] Oxybenzone also causes endocrine, or hormone, disruption, DNA damage, and even death of coral. [7] These destructive effects can occur in both mature and larval coral organisms. [8] Oxybenzone can cause toxic effects at a concentration of 62 parts per trillion, which is equivalent to a drop of water in six Olympic-size swimming pools. Considering that coral reefs are exposed to 4,000 to 6,000 tons of sunscreen each year, higher concentrations of oxybenzone are certainly possible. [7]

The threat posed to coral reefs by toxic sunscreen doesn't solely stem from wearing sunscreen in the ocean. Even if sunscreen is applied miles away and the wearer never enters the water, the toxins can still find their way there through the sewer system. The sunscreen has to be washed off eventually, usually through a shower, and when it is, the toxins are carried through the sewer lines and into the ocean. The use of oxybenzone isn't limited to sunscreen; it’s also found in body fragrances, hair styling products, dish soap, and other personal care products. All of which also have the potential of entering the ocean through the sewer system. Coastal cities, such as Ocean City, Maryland and Fort Lauderdale, Florida, have sewer systems that direct toxic wastewater away from public beaches, sending runoff from personal care products into the ocean. [9] Heavy rainfalls also spell trouble for coral reefs because they often cause sewer overflows that run into rivers and eventually, the ocean. 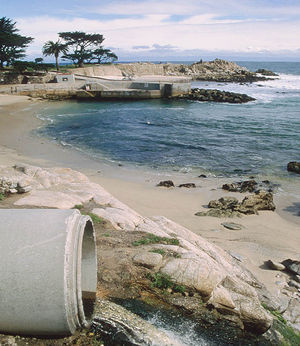 Oxybenzone is often used as an active ingredient in sunscreen lotions and personal-care products, such as body fragrances, hair-styling products, shampoos and conditioners, anti-aging creams, lip balms, mascaras, insect repellants, as well as dishwasher soaps, dish soaps, hand soaps, and bath oils. It is also found as a contaminant in boating, residential, and municipal wastewater. Oxbenzone and similar chemicals are considered emerging environmental contaminants of concern by the U.S. Environmental Protection Agency. Between 6000 and 14,000 tons of sunscreen lotion, many of which contain between 1% and 10% oxybenxone (BP-3), are estimated to be released into coral reef areas each year, putting at least 10% of the global reefs at risk of exposure, and approximately 40% of coral reefs located along coastal areas at risk of exposure. [11] In 2015, scientists examined the effects of oxybenzone on the larval form (planula) of the coral Stylophora pistillata, as well as its toxicity in vitro to coral cells from this type of coral and six other coral species. Scientist measured the rate of coral bleaching, DNA damage and planula mortality in response to oxybenzone (BP-3) exposure [11]. 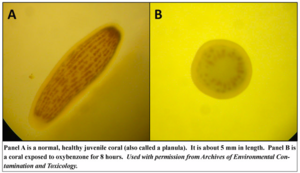 Oxybenzone is a photo-toxicant, where adverse effects are exacerbated in the sunlight. However, whether in darkness or light, oxybenzone proved to transform planulae from a motile state to a deformed, sessile condition. Planulae exhibited an increasing rate of coral bleaching in response to increasing concentrations of oxybenzone. Oxybenzone is a genotoxicant to corals and are mutagens that increase the rate of damage to DNA of the coral animal. Additionally, Oxybenzone is a skeletal endocrine disruptor; it induced ossification of the planula, encasing the entire planula in its own skeleton. [11] To determine the environmentally relevant concentration of BP-3 in seawater on coral reefs, scientists measured BP-3 concentrations at various locations in the U.S. Virgin Islands and the U.S. Hawaiian Islands. The Virgin Islands ranged from 75 parts per billion (µg/L) to 1.4 parts per million (mg/L), whereas Hawaiian sites were contaminated between 0.8 and 19.2 µg/L. [11] Because Oxybenzone deforms planulae, disrupts DNA, genetically mutates cells and leads to rapid coral bleaching, it poses a significant potential hazard to coral reef conservation and threatens the resiliency of coral reefs to climate change. More research is needed to show the effects of oxybenzone on corals in the wild, and additional water quality testing at sites mentioned in the studies should be performed to confirm the high concentrations reported.

While the two studies mentioned present some compelling evidence, the wider scientific community remains unconvinced. Terry Hughes, Distinguished Professor at James Cook University, points out that "the way in which coral tissues were exposed to sunscreen in experiments does not mimic the dispersal and dilution of pollutants from a tourist’s skin (and other sources) into reef waters and onto corals growing in the wild." [12] Hughes also points out that some of the alarming concentration values reported from the US Virgin Islands were based off of a single sample, and that the study authors "did not report results for any blank samples (to control for contamination)". [12]

In addition, a separate study conducted by the Bermuda Institute of Ocean Science led by senior scientist and coral reef ecologist Eric Hochberg found "no differences in coral health between the experimental and control groups, suggesting that long-term, low-level exposure to oxybenzone does not negatively impact coral health." [13]

After the publication of the two studies focused on organic filters, several tropical locations, including the state of Hawaii, banned the use of sunscreen products contained oxybenzone. The negative press associated with oxybenzone has caused a rise in sales of mineral-based sunblocks that rely on creams that coat the skin with nanoparticles consisting of zinc and titanium particles. Unfortunately, a study from 2018 found that "uncoated ZnO induces a severe and fast coral bleaching due to the alteration of the symbiosis between coral and zooxanthellae. ZnO also directly affects symbiotic dinoflagellates and stimulates microbial enrichment in the seawater surrounding the corals." [14] An earlier study from 2014 looked at the potential effects of titanium dioxide (TiO2) nanoparticles on Caribbean star corals (Montastraea faveolata) from a region near Panama. [15] They found that "exposure to nano-TiO2 caused significant zooxanthellae expulsion in all the colonies without mortality". In other words, the corals in their study expelled their zooxanthallae, but the corals didn't die as a result.

In an effort to curb the amount of oxybenzone entering the ocean, researchers have encouraged consumers to pay attention to the ingredients in their sunscreen. Instead of purchasing sunscreen that contains oxybenzone, consumers should search for a product that has mineral active ingredients, such as zinc oxide or titanium dioxide. [8] There has also been a push to urge people to wear more clothing while in the sun. Wearing rash guards, hats, or other protective clothing limits the amount of sunscreen required and thus, decreases the amount of sunscreen that is entering the ocean. Particularly high tourist areas have started taking matters into their own hands when it comes to protecting the coral reefs. In Akumal, Mexico, a destination known for its coral reefs, tourists are encouraged to wear eco-friendly sunscreen and are restricted to certain areas to minimize the disturbance of coral reef life. [6]

The most important thing to remember when shopping for sunscreen is to look at the ingredients. Avoid anything that contains oxybenzone, which is found in over 3,500 sunscreens. The more popular sunscreens such as, Coppertone, L'Oreal, and Banana Boat all contain oxybenzone, so they should be avoided. When searching for a safe sunscreen look for products containing titanium dioxide. Be wary of sunscreens that claim to be "reef safe" on their labels. "Reef safe" claims are unregulated, so sunscreens can still sport this title even if they contain oxybenzone. The nonprofit Environmental Working Group issues an annual Guide to Sunscreen, which offers additional details and research on the active ingredients for most sunscreens sold in the United States. Many sunscreens that are potentially detrimental to coral also are associated with negative health impacts to humans. Check out their | Guide to Sunscreen

For presentation materials and flyers on sunscreen and its effects on coral reefs visit: [1] and [2]