Difference between revisions of "Symbiosis"

Symbiosis is a broad term describing the relationship of two dissimilar organisms living together [1]. Often one organism lives inside of another as is the case of corals and zooxanthellae, but can also describe organisms living in very close vicinity to each other (think of the birds who take refuge on hippopotamus' backs).

The Coral Probiotic hypothesis, for example, posits that a dynamic relationship exists between coral and the large array of bacteria on their surface, so that when environmental conditions change in the oceans, coral can change which microbial partners they are currently maintaining a relationship with in order to more quickly adapt to those changing conditions. [2]

Though coral reefs are home to an abundance of symbiotic relationships, symbiosis is not limited to these ecosystems.

One of the greatest examples of symbiotic relationships is that of corals and zooxanthellae. Zooxanthellae are small yellow-green algae that often reside inside corals. Like other algae, zooxanthellae use sunlight to undergo photosynthesis converting carbon dioxide to oxygen and sugars. This is of great advantage to the corals; these sugars supplement or even replace their plankton diet. Then, when the corals release carbon dioxide as waste, it is consumed back by the zooxanthellae. [3]

The zooxanthellae-coral relationship is a fragile one, being highly sensitive to temperature stress. This sensitivity puts the coral at high risk of bleaching events, wherein the algae leaves the coral and the mutual relationship ends.

The mutualistic relationship between Acropora millepora Hard Coral and Symbiodinium (zooxanthallae) Algae is one that benefits both the coral and the algae. The Symbiodinium genus can be divided into 8 clades, each clade having a varying response to light and temperature changes[4]. The relationship between clade types harbored in the Acropora millepora coral was monitored before and after a Great barrier Reef bleaching event. Before bleaching, 93.5% of the 460 communities were home to predominantly the C2 clade of Symbiodinium, whereas the remainder were home to predominantly clade D or a relative even mixture of clade C2 and D. After the bleaching event, the surviving coral communities were again observed for their relative abundances of Symbiodinium. After bleaching, the previously abundant C2 algae were found in only 29% of corals, and the remaining 71% harbored predominantly D or C1 algaes.[4] The change in relative abundances of Symbiodinium acutally makes the relationship more tolerant to temperature changes, since the temperature-sensitive C2 algae was mostly replaced by the less sensitive D and C1 algaes. 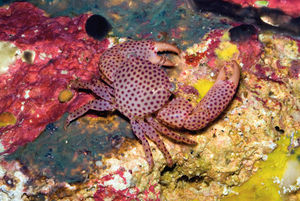 Symbiotic relationships are also maintained between some types of coral and small organisms. The trapeziid crab-stony coral relationship [6] is an example of a symbiotic relationship wherein a small organism (trapeziid crab) lives on the coral reef and benefits the stony coral by removing any excess sediment that falls on the reef. Sedimentation on reefs has been steadily increasing worldwide, but it is detrimental in that it inhibits growth of the coral and accelerates tissue bleaching. In return, the coral offers a few polyps to the crabs as a source of nutritional value for their efforts in cleaning up the reef, in addition to shelter from predation. A healthy coral should have no problem recovering from the trade off of a few polyps. [7] Therefore, the delicate symbiosis existing between the two species must be maintained to support the existence of both species. 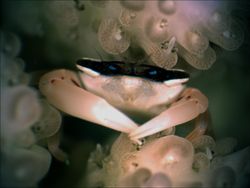 In a field experiment conducted at UC-Santa Barbara, Stewart et. al transplanted sections of stony coral with trapeziid crabs, leaving control transects of the reef free of the tiny crabs. Sedimentation was not enhanced as part of the researchers. Results showed that all corals outplanted with crabs survived, while 45-80% of those outplanted without crabs died (bleached) within a month. Those sections of the coral bleached were without crabs. These results suggest that trapeziid crabs play a crucial role in maintaining the health of the reef, not only for the coral itself, but also the other organisms within the reef [6] 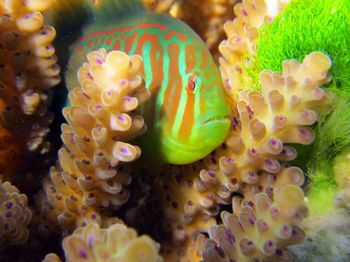 Similar to their constant, encroaching battle with sediment, corals must fight off noxious seaweed in a war for ocean space. Scientists at the Georgia Institute of Technology have discovered that when staghorn species Acropora nasuta detect certain chemical signitures from seaweed, they call on two species of gobies, the broad-barred goby and the redhead goby, whose job is to respond to the chemical signal released by the coral and consume/remove the excess seaweed [9]. In an experiment aimed to elicit this phenomenon, Dixson et. al introduced either turtleweed seaweed or nylon (to mimic the physical structure of turtleweed) to the staghorn coral. Within 3 days, the staghorn colonies infested with seaweed saw 30% less seaweed than before. In this way, the gobies effectively reduced the potential damage to the coral by up to 80% [9]. It is significant to note that the gobies did not respond and remove the nylon when the coral was flanked by its masses, because the coral did not detect the chemical signature from seaweed to start the chain of their own releasing of chemicals. Additionally, it was found that after consuming the toxic seaweed, the toxicity of the predatory broad-barred goby increased as well. The broad-barred goby secretes a toxic mucus in its own defense. [10]

Sea Sponge Mutualism: Protecting One Another

Mutualism is not restricted to corals and/or fishes. There is evidence of mutualism between "heterospecific" sea sponges on coral sites. By connecting to one another, sea sponges of different species can increase both growth rate and survival rate. Sea sponges are at risk of "a variety of environmental hazards, including predation by angelfishes and trunkfishes, predation by starfish, smothering by sediment, breakage by storm waves, pulverization by storm waves, toppling by storm waves, fragment mortality, and pathogens"[11] Sponges of different orders have varying skeletal structures, tissue density, and chemistry. In turn, some sponges are more resistant to certain dangers than others. In theory, heterospecific sponges that attach to each other can help one another by essentially sharing their strengths.

This mutualism drives heterospecific sponges to adhere to one another (so as to improve odds of survival. In a study in a shallow reef off of Guigalatupo, Panama, Janie L. Wulff of the Smithsonian Tropical Research Institute studied the mutualism between heterospecific sponges. In the study, 61% of sponges adhered to another species of sponges.[11]