Common sources of water pollution that affect the coral reef environment include variations of chemical and physical factors from industrial, domestic, and individual entities. Pollution can be done purposefully or accidentally and on a variety of scales by corporations attempting to rid themselves of waste materials, chemicals leeching out of a swimmer's sunscreen, or as a result of coastal development. A decrease in the proficiency of corals has been noticed globally. Numerous forces easily disturb the fragile state of coral reef biomes. A slight change in pH, temperature, chemical content, strength of sunlight may be enough to bleach a reef, and even kill it. Regardless of the source of pollution, consequences include a severe loss of biodiversity, damages to food chains, loss of habitat for indigenous creatures, and as a result loss of income for tourism based economies.

Industry affects the coral reef biome in numerous ways, depending on the type and degree of emitted pollutants. The form of pollution may differ between various factories or agricultural areas, and also varies based off of the number of businesses or people within the area. [1] Manufacturing complexes are more likely to emit chemical and thermal pollutants during product assembly as turbines are cooled with ocean water and excess reagents are released into the sea. Large scale agricultural businesses are more prone to pollution via emission of fertilizers, pesticides, and animal waste products into the ocean. [2] Studies have found that about 80 percent of pollution that affects coastal ecosystems is produced terrestrially, a number that could easily be reduced with effective policies and management. [1]

City development entails negative consequences for the reefs as well, as household runoff from manicured yards pollutes the surrounding waters. [3] Development of housing also requires the removal of native vegetation, which results in erosion and degradation of beach habitats and adds sediment to contingent beaches. [4] [2] If located in an area close to reefs, the unsettled sediment may land on and smother the reefs, crushing them and blocking necessary sunlight. [4] Urban development is becoming a progressively pressing issue as the number of people residing in beach side properties increases, especially when newcomers lack knowledge about proper locational maintenance. [3]

Poorly managed tourism damages coral reefs as well. Ignorant visitors may accidentally knock, kick, touch, or physically harm the corals by kicking with flippers in shallow areas or stealing fragments as souvenirs. [5] In addition, certain sunscreens that tourists wear contain compounds that are toxic to the reef system and upset the fragile chemical balance of the waters by adding phosphoric particles into the water that unbalance the pH of the water [6] and rupture the cells of the zooxanthellae on the surface of the coral. [7] A study conducted by Roberto Danovaro from the Polytechnic University of Marche in Italy predict that in tourism rich areas, corals can be bleached within four days of sunscreen exposure and that each year, globally, approximately 4,000 to 6,000 metric tons of sunscreen are absorbed by the ocean which has resulted in a ten percent decrease in coral life worldwide. [7]

Excretion of biologically hazardous materials into coral reef habitats holds major implications for animal survival and ecological stability. In areas where corals are located, in this case the majority of the Caribbean, proficient sewage systems are not provided by the state, and therefore approximately less than 16 percent of sewage is correctly treated. [2] Also, boats that contain waste repositories on deck pose a problem because of the difficulty in maintaining restrictions (currently no waste can be disposed of within 4 miles of coastal areas) on where waste is released into the water. [2] The effects of exposure of coral reefs to septic waste are extremely deleterious as it causes eutrophication and introduces new strains of diseases into the environment. Eutrophication, or an increase in nutrient levels, results in expedited algae and bacterial growth, altering the chemical composition of the usually nutrient deficient water and killing sea grasses and corals. Fecal waste also exposes corals to diseases from which they may not have immunity. [8] Examples would be the Serratia marcescens, which does not affect humans, and Arcobacter, which causes mild diarrhea in young children.[8] Once introduced, these diseases cause white pox in elkhorn corals and black band disease in round corals. [8]

Litter and other forms of debris hold obvious consequences for life within the reefs. Ramifications include physical damage to animals such as scrapes or accidental ingestion, which could result in infections or death and a loss of biodiversity. In addition, large fragments of trash that sink to the ocean floor may land on corals or seagrasses, breaking and restricting access to sunlight. The presence of litter is also unsightly and discourages tourists from visiting and supporting the local economy.

Water pollution is often categorized by the source type through which the pollutant(s) is/are discharged into another body of water. The two source types, as defined by the US EPA, are point and nonpoint.

The US EPA regulates point source pollution through the Clean Water Act (CWA). The CWA defines provides a legal definition of point sources in section 502(14) of the CWA:

"The term "point source" means any discernible, confined and discrete conveyance, including but not limited to any pipe, ditch, channel, tunnel, conduit, well, discrete fissure, container, rolling stock, concentrated animal feeding operation, or vessel or other floating craft, from which pollutants are or may be discharged. This term does not include agricultural storm water discharges and return flows from irrigated agriculture." [9]

Nonpoint sources of water pollution is generally any source of water pollution that does not meet the legal definition of point source pollution, provided in the previous section. It can come from many different, diffuse sources, including land runoff, precipitation, atmospheric deposition, drainage, seepage or hydrologic modification. Pollution from nonpoint sources is often carried by rain or snowmelt that flows across land, eventually depositing them into lakes, rivers, wetlands, coastal waters and ground waters. [9]

Nonpoint source pollution is largely considered the leading remaining cause of water quality problems, and they are difficult to regulate due to the indeterminate nature of the initial source. Regulation of these sources is extremely important to human and environmental health, as these pollutants have harmful effects on drinking water supplies, recreation, fisheries and wildlife.[9]

The major sources of pollution on St. John include coastal development and runoff, industrial and biological discharge, and pollutants associated with tourism and recreation.

Coastal sedimentation is an important nonpoint source pollutant. Causes of coastal sedimentation have shifted from primarily natural to anthropogenic origin, with increased population resulting in the need for more housing, roads, and other development in the region to accommodate the influx of tourists. This is a particularly notable problem in St. John and St. Thomas, where steep mountain slopes allow rapid runoff. Indeed, studies indicate a direct relationship between shoreline development in St. Thomas and increased sedimentation during periods of heavy rainfall. [10] Given similar topology and the fast pace of shoreline development on St. John, it is likely that these trends can also be seen on that island.

Impacts of coastal development and runoff can include the following:

Both chemical and biological pollution are significant problems in St. John. Chemical pollutions result from untreated discharge from industrial facilities like factories. In St. Croix, for example, a rum factory was found to discharge chemical wastes directly into the sea, forming a plume that could be traced about 10 km away from its point of origin. [11]

Biological pollutants include bacterial contaminants such as E. coli and other organisms associated with untreated human waste. Heavy rainfall can exacerbate this problem by overloading sewage systems, resulting in severe contamination of coastal waters. [11]

St. John's transition from an economy based primarily on agriculture and fisheries to one heavily reliant on tourism has resulted in new sources of pollution. Given the increased demand for land-based accommodations, development has increased. Forest and topsoils are removed to make way for development, increasing soil runoff during the rainy season, resulting in increased siltation of coral reefs. Additionally, direct recreational use of coral reefs can be damaging, as people can come in direct physical contact with corals and/or as sunscreens and other chemicals or biological agents are transmitted from humans and into the marine environment. [11] 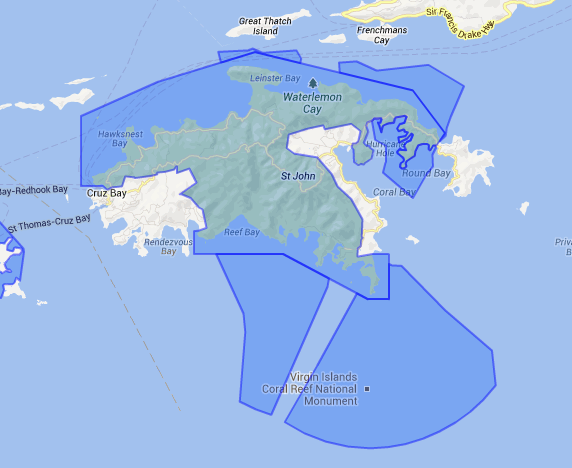 Effective conservation of coral ecosystems must be based on the needs of the specific ecosystems and communities; a single, one-size-fits-all approach will not be effective in all ecosystems and environmental conditions. For instance, the placement of a marine protected area can effectively address the impacts of fishing and/or conserve an area potentially resilient to climate change, coupled with efforts to address land-based sources of pollution from adjacent and associated watersheds. [19]

Coral reef management strategies that seek to engage and actively involve communities will ultimately be the most effective. Activities related to social science, education and outreach, and community engagement are critical, and a multidisciplinary approach to conservation must also include on-the-ground management actions, biophysical monitoring, applied research, modeling, socioeconomic research, enforcement, and capacity building. [20] Marine ecosystems are extremely complex, and a multidisciplinary approach allows for consideration of all relevant inputs that affect the final outcome of interest.

NOAA conducts many research, restoration, and monitoring expeditions to coral ecosystems, some of which are funded by the NOAA Coral Reef Conservation Program. [21] These efforts can improve long-term implementation and monitoring of restoration techniques that are scientifically proven to be effective.